The Kid In This Pic With Dharmendra Is His "Ummeed, Bharosa." Guess Who? 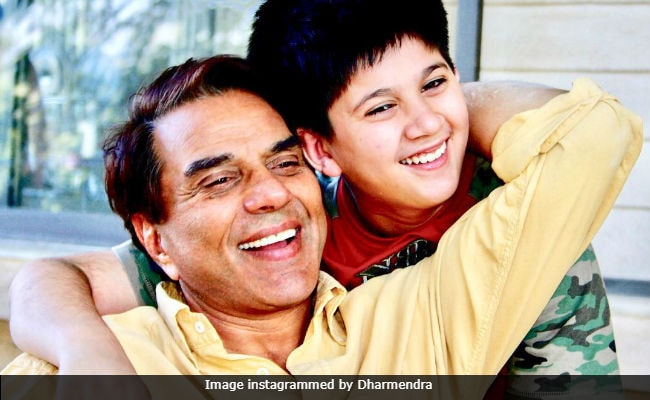 New Delhi: This cute kid in the photo with Dharmendra is his grandson Karan Deol, who is all set to make his Bollywood debut in Pal Pal Dil Ke Paas. Did you guess that right? "Meri pyaari si ummeed, mera bharosa, mera pyara pota, Karan Deol... pal pal mere dil ke paas," Dharmendra captioned the post. Karan's debut film will be directed by his father Sunny Deol, who has earlier made Dillagi (1999) and Ghayal Once Again (2016). Dharmendra's followers on Instagram showered Karan with their love and best wishes in the comments section of the post, which has over 13,000 likes.

Sunny Deol formally announced Karan's debut project in May 2017 and Bollywood welcomed him with open arms. While his father said that planning his son's debut film was a "huge task," Karan's grandfather told news agency IANS that his grandson is very confident. "He has confidence and I want him to fly with his confidence. I wish he gets successful in his career and life," Dharmendra told IANS last year. On the other hand, Sunny Deol told PTI: "My father did not direct me. It is a 'huge task' since it is Karan's first film. I want to give my best to it. I am a bit conscious as I am launching him."

Dharmendra will be next seen in Yamla Pagla Deewana 3 along with his sons Sunny and Bobby Deol.