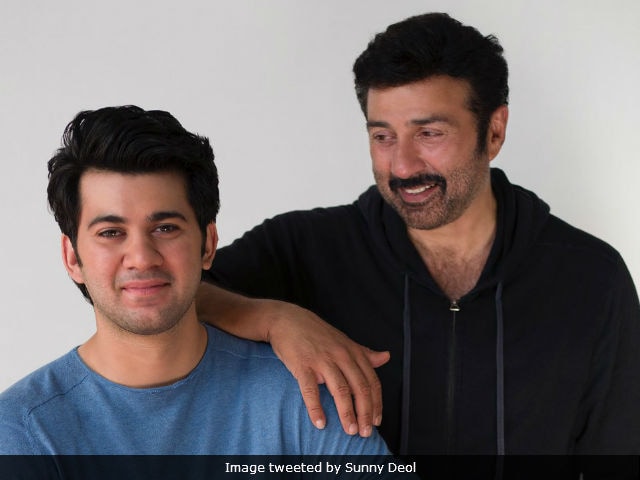 New Delhi: Actor director Sunny Deol, who is all set to present his film Poster Boys at the theatres tomorrow, says he's a bit conscious about launching his son Karan Deol, reports news agency PTI. Karan will make his Bollywood debut with Pal Pal Dil Ke Paas, directed by Sunny Deol. The Gadar: Ek Prem Katha actor says he realises that launching his son is a 'huge task' and he is fully aware of the responsibility, reports PTI. Sunny Deol, 60, has earlier directed films like Dillagi, which featured his brother Bobby Deol and 2016's Ghayal Once Again. He has already started working on Pal Pal Dil Ke Paas and the cast and crew filmed in Manali.

"My father did not direct me. It is a 'huge task' since it is Karan's first film. I want to give my best to it. I am a bit conscious as I am launching him," PTI quoted Sunny Deol as saying. The Singh Saab The Great actor believes in letting his son discover things as an actor on his own.

Talking about his Karan, 25, Sunny said, "I don't give him any advice. He has to be honest to his profession and craft of acting, work hard and enjoy what he does," reports PTI.

When asked about star kids being subjected to excessive scrutiny, Sunny said, "He (Karan Deol) will tackle it when the time comes. Let him have some breathing space. It is too early to talk about him."

About Pal Pal Dil Ke Paas, he said, "We are working around the film and the work is going on well. We have not thought about the release date yet," reports PTI.

Earlier, when Sunny had shared a picture of Karan Deol from the first day of the shoot, Bollywood stars congratulated him and welcomed Karan to Bollywood on Twitter. Celebs like Rishi Kapoor, Salman Khan and Shah Rukh Khan tweeted and wished them good luck for their upcoming film.

All the best papa. He looks as tough and gentle as you. May all good things come his way. https://t.co/75DVSGC8J0

Promoted
Listen to the latest songs, only on JioSaavn.com
Meanwhile, Sunny Deol will also reunite with Bobby Deol and father Dharmendra, in the next film of the Yamla Pagla Deewana series.