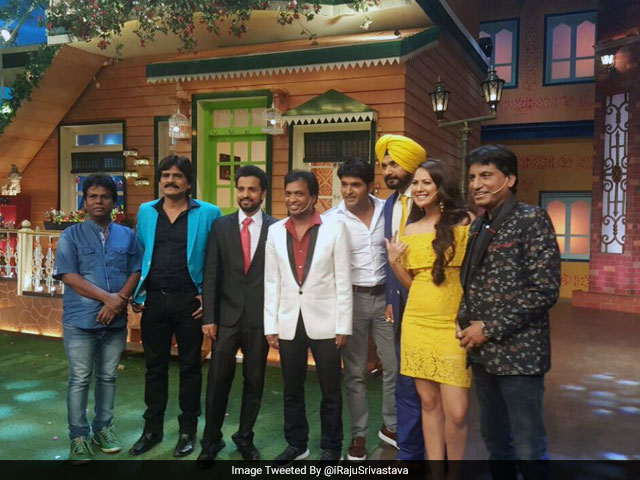 Raju Srivastava on the sets of The Kapil Sharma Show (courtesy: iRajuSrivastava)

New Delhi: No, Sunil Grover is not returning to Kapil Sharma's show after his alleged fight with the show headliner. Meanwhile, comedian Raju Srivastava confirmed that he continues to shoot for The Kapil Sharma Show as a "new entry." Mr Srivastava made an appearance as one of the guests on the comedy show after Mr Grover stopped shooting for it and his co-stars, fellow comedians Ali Asgar, Chandan Prabhakar and Sugandha Mishra, boycotted the show in support of Mr Grover. Now, Mr Srivastava says that the makers have decided to include him in more episodes because they liked his performance. "Yes, I have started shooting for this show. The channel and the team are happy with the episodes I have shot for them and have called me for more episodes," Mr Srivastava told NDTV.

Mr Srivastava, who spoke to NDTV on Wednesday, said that he'll be shooting for a full-fledged act for a new episode and not star as a guest. "This time, I have been called for an act. We'll shoot for it today," he said.

When asked about his inclusion on The Kapil Sharma Show, which airs on Sony, Mr Srivastava said: "I don't know how the channel is going to represent my character or my acts to the audience. But this is true that I'm shooting for the show and will feature in the show as a 'new entry'."

Meanwhile, Mr Grover dismissed reports of his shooting for new episodes of The Kapil Sharma Show as "lies," reported mid-day. "At present, I am focusing on live shows and nothing else. I am also not talking to any other channel," mid-day quoted Mr Grover, who is currently under contract with Sony. Mr Grover had also quit Kapil's previous show Comedy Nights With Kapil citing payment issues.

Promoted
Listen to the latest songs, only on JioSaavn.com
Mr Grover is not returning to Kapil Sharma's show but he performed at a charity event in Assam last week and has a live show with colleague Kiku Sharda scheduled for Saturday in New Delhi. At both gigs, Mr Grover will perform live as the characters Dr Mashoor Gulati and Rinku Bhabhi, the characters he played in The Kapil Sharma Show.

Earlier this month, Kapil Sharma allegedly verbally abused and assaulted Sunil Grover with a shoe while Team The Kapil Sharma Show were flying out of Australia. Several eyewitnesses revealed that a drunken Mr Sharma lost his calm after his teammates began their meal without him. Mr Sharma was particularly offensive towards Sunil Grover after he tried to pacify his colleague.