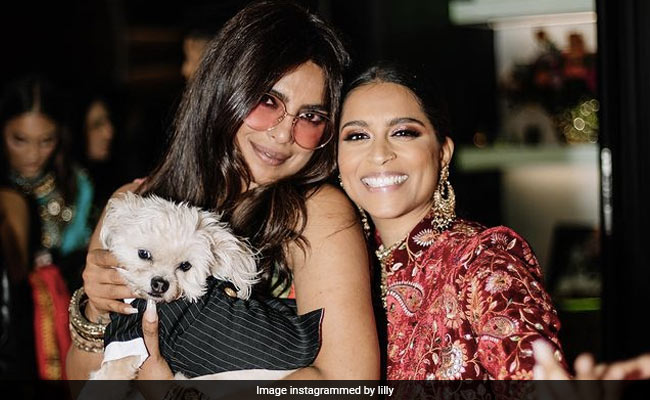 Priyanka Chopra may be on the path to global domination with her international films and business ventures but she will always be a desi girl at heart. This the actress proved yet again during the Diwali celebrations over the weekend.  Priyanka Chopra threw a grand Diwali party of her own and was also seen attending celebrations hosted by several close celebrity friends including actress Mindy Kaling and YouTuber Lilly Singh. Priyanka Chopra posted pictures from the opulent get-together hosted by Lilly Singh before which she shared images from Mindy Kaling's Diwali bash and the Internet had a collective meltdown. The actress' Diwali vibes from the various parties have captured the world's attention and she is now trending on Twitter for her Indian ensembles and stunning looks.

Sharing pictures from the occasion, where Priyanka Chopra was dressed in a floral Indian ensemble, the Quantico star said, “What makes Lilly Singh the perfect host and dost? She's a fellow PUNJABI. What an epic end to this year's Diwali celebrations!”

She further wrote, “Thank you Lilly for such an amazing evening!”

Reacting to the image, Nick Jonas dropped a heart-eye emoji.

Lilly Singh, who is one of the most successful content creators in recent times, also shared pictures from the occasion. Posing with Priyanka Chopra, who is seen holding Lilly's pet dog, Scarbro, Lilly Singh said,  “Last night was a movie. Love and light with the Desi squad. Honoured to be surrounded by such incredible people. And then get lit with them. And then wild out with them. And then have senti talks with them. And then watch them WIN. I'm going to have to make this an annual thing.”

Priyanka Chopra also celebrated Diwali at her home in Los Angeles, with her husband Nick Jones. Sharing inside images from the Diwali party, Priyanka Chopra wrote, “Our first Diwali in our first home together. This one will always be special. Thank you to everyone who worked so hard to make this evening so special. You're my angels.”

She further added, “To everyone who honoured our home and my culture by not only dressing the part but dancing the night away, you made me feel like I was back home. And to the best husband and partner Nick Jonas, you are what dreams are made of. I love you. My heart is so grateful and full,” wishing her Instafam a happy Diwali.

The happy couple also had a special puja on the occasion. Here are the pictures:

Remember we told you about Priyanka's pictures that have the Internet swooning over her Diwali look and mood at Mindy Kaling's party?  Dressed in all her Indian glory, Priyanka Chopra looked stunning as ever as she posed and let her hair down at the bash. And, we the photos right here for you to see. Take a look:

Priyanka Chopra and Nick Jonas have been married since 2018. The actress will next be seen in the series Citadel.