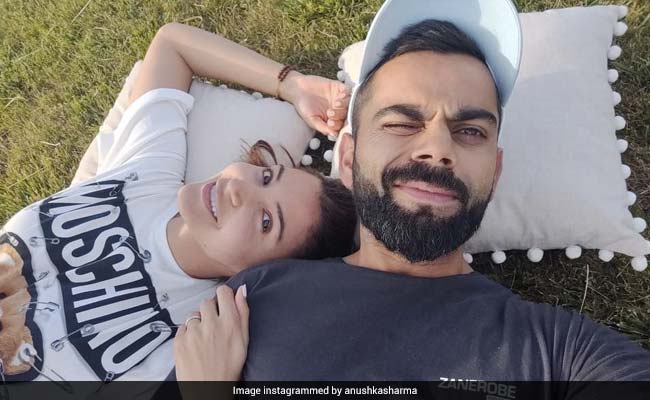 We just can't seem to get enough of Anushka Sharma and Virat Kohli's social media PDA and Anushka's latest Instagram post proves why. On Wednesday, the actress shared a loved-up picture of herself along with her cricketer husband Virat Kohli. In the picture, the couple can be seen lying down on lush green grass as they rest their heads on white pillows and we must tell you that they look absolutely adorable. Anushka captioned the picture: "Sun soaked and stoked" and she added the hashtag "#throwback" to the post. Anushka shared the picture with her 24.2 million followers on Instagram, of which over 4 lakh fans have liked the picture. Remarks such as "cuteness overloaded" and "couple goals" kept popping up in the comments section.

Anushka and Virat frequently feature on each other's Instagram profiles and we simply love it when that happens. On Valentine's Day, Anushka shared multiple mushy pictures on her Instagram profile and she wrote: "Love is beyond and above everything. The only thing that's real. It's all encompassing and beyond the reach of the mind. Happy Valentine's Day to all."

Love is beyond and above everything. The only thing that's real . It's all encompassing and beyond the reach of the mind . Happy Valentine's day to all

In January, the star couple treated their fans to several loved-up pictures from their New Zealand trip. Here are some pictures:

You make me such a happy girl

Virat Kohli and Anushka Sharma got married in December, 2017 in Italy, after dating for several years.