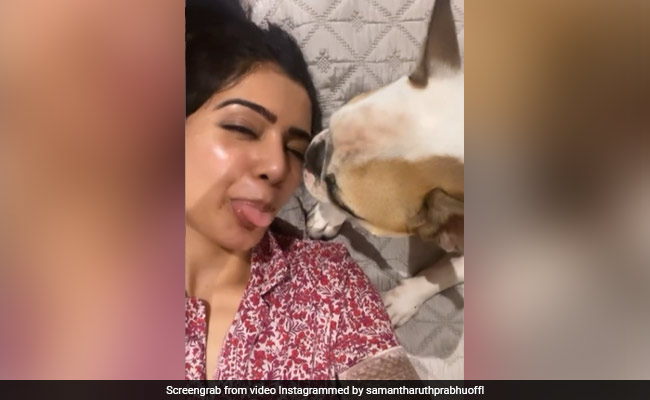 Samantha and Hash in a still from the video. (courtesy samantharuthprabhuoffl)

Samantha Ruth Prabhu shared a super cute video with her pet pooch Hash on her Instagram profile on Tuesday. The actress posted an Instagram video, which had visuals of Hash with a funny voiceover. Samantha breaks into a smile after seeing Hash's animated expressions in the video. The smile says it all. The star very aptly captioned the post: "The chronicles of being cute," adding a heart emoji to it. The comments section of her post was filled with comments like "so cute" and "aww." An Instagram user wrote: "Dead." Simply put, the video is too cute.

Samantha loves to share posts with her pet. Last month, she posted a video of herself with her dog and she wrote in her caption: "My goodboi and his balloon obsession. #hyderabadweatherisxoxoxo."

Samantha Ruth Prabhu has starred in films such as Ye Maaya Chesave, Rangasthalam, Neethaane En Ponvasantham, Yeto Vellipoyindhi Manasu, Seethamma Vakitlo Sirimalle Chettu, Majili (in which she co-starred with her husband Naga Chaitanya), Jaanu and Oh! Baby. She will next be seen in Kaathuvaakula Rendu Kaadhal.