"The Blues Are Highly Appreciated" By Minissha Lamba, Holidaying In Maldives

"A picture a day keeps the blues away," wrote Minissha Lamba 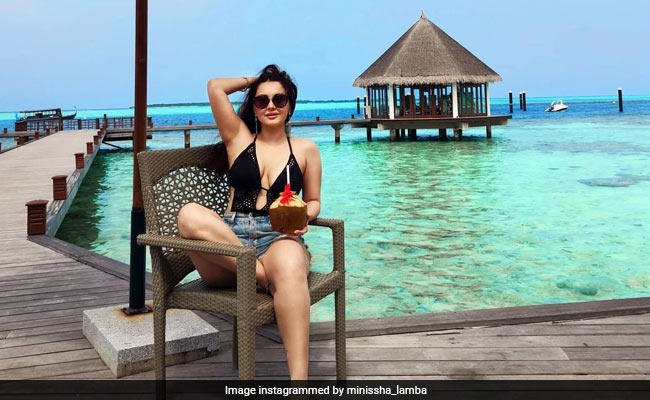 Minissha Lamba, who is currently on a holiday in the Maldives, doesn't seem to mind "the blues" at all. The actress, who has actively been sharing pictures from her vacation in the island nation, added another postcard-worthy shot to her Instagram profile on Wednesday. In the picture, Minissha can be seen chilling in a swimming pool as she enjoys the stunning view of Maldives. She can be seen dressed in white swimwear and she accessorised her look with an oversised hat and sunglasses. The caption on her post read, "A picture a day keeps the blues away.... In this case though... The blues are highly appreciated."

Minissha, who had a hard time thinking of a caption, decided to share what her day looked like. She wrote in her caption: "Can't think of smart captions... How do people do it? So instead maybe I'd give u a glimpse of what the day was like... It was hot! As hot as Mumbai but still not humid... So sitting out getting pictures like this was doable. That smile was temporary... Coz I had to leave... Definitly nothing to be happy about there."

Here are some more pictures from the Bachna Ae Haseeno actress' Maldives holiday:

Minissha Lamba's filmography includes movies like Yahaan, Kidnap, Dus Kahaniyaan, Bhoomi, Anthony Kaun Hai and Shaurya and Punjabi films Heer And Hero and Double Di Trouble. She is best known for starring in the 2008 film Bachna Ae Haseeno, which also starred Ranbir Kapoor, Deepika Padukone and Bipasha Basu. A few years ago, she trended big time after she revealed that she switched careers to become a professional poker player.

ICYDK: Parineeti Chopra Was An All-India Topper In Class 12 Economics Board Exam