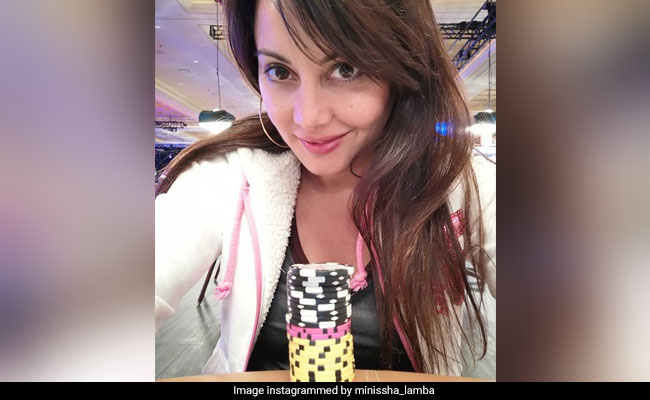 Minissha Lamba, best-known for her roles in films like Bachna Ae Haseeno and Yahaan, is a professional poker player now and she's currently participating in tournaments worldwide, reports Mumbai Mirror. Minissha Lamba, who was last seen in 2017 film Bhoomi, told Mumbai Mirror that a friend of hers introduced her to poker and though she 'initially shied away' from it, she picked up the game and felt a sense of 'achievement for a hand well played. Of keeping a low profile on the films front, Minissha said that her career in Bollywood took back seat after she did not receive the 'roles she would have liked to do' and added that that she'll return when she's offered a 'role which surprises her.'

"Unfortunately, I didn't end up getting the kind of roles I would have liked at that point in time. Now things have changed. For movies, I would love to do interesting characters. I have been doing theatre actively. Web and television offers are coming in. Right now, I am just waiting for that role which surprises me and then I will be all in." Minissha said of returning to films.

Of how she was introduced to poker, Minissha said, "It happened randomly over one Diwali. A friend upon returning from America insisted on teaching us poker. I shied away from it because playing cards wasn't something that interested me. But as you get to this game, the complexities and sheer need for being on the ball give you a feeling of achievement for a hand well played."

Minissha Lamba recently participated in the World Series of Poker, where she finished 64th out of 1130 players.. Minissha shared the update on her Instagram page and wrote, "It's so crazy... Overwhelming experience to play the World Series of Poker Series.... Playing the Pot Limit Omaha Bounty Tournament... I eventually finished 64th in this out 1130 players.... Close... Yet so far."

It's so crazy... Overwhelming experience to play the World Series of Poker Series.... Playing the Pot Limit Omaha Bounty Tournament... I eventually finished 64th in this out 1130 players.... Close.. Yet so far #wsop2019 #wsop #poker