The soulful number is from the film The Big Bull, featuring Abhishek Bachchan and Nikita Dutta 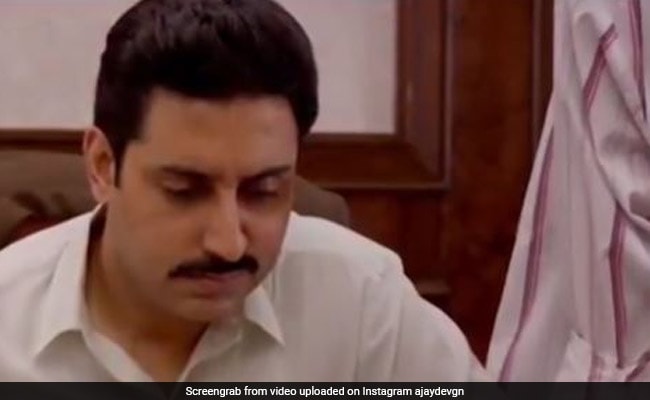 Ajay Devgn has shared a glimpse of the romantic song Ishq Namazaa. The soulful number is from the film The Big Bull, featuring Abhishek Bachchan and Nikita Dutta. Ajay, who is the producer of the movie, picked a line from the lyrics for his caption. "Na mujh mein 'main' hoon, na tujh mein 'tu' ha, sirf Ishq hai!" He also revealed that the track will be out tomorrow, March 25.

Nikita and Abhishek shared the same clip on their Instagram timelines and wrote, "Tomorrow's market prediction: love at an all-time high #IshqNamazaa." The actors play a married couple in the movie.

The Big Bull helmed by Kookie Gulati is based on the stock market scam of 1992. Abhishek plays the lead role that is loosely inspired by stockbroker Harshad Mehta's life.

The makers recently witnessed a comparison between the film and the popular Pratik Gandhi-led TV series, Scam 1992. Producer Anand Pandit told Koimoi, "Big Bull has nothing to do with the scam actually. That was more like a television serial and it was based more on a book by somebody [Sucheta Dalal and Debashish Basu's The Scam: Who Won, Who Lost, Who Got Away]. This [Big Bull] is inspired by the actual events and also, there's a lot of friction in this."

The director earlier revealed that he and his team indulged in deep research through libraries and books. In the statement, Gulati said, "We extensively watched a lot of videos of those times and because I'd lived through them at the stock market, it became easier for me. Once the research was done it was still a mammoth task to bring it alive." The film also has Ileana D'Cruz, Sohum Shah, Ram Kapoor and Saurabh Shukla in significant roles. It will stream from April 8 on Disney+ Hotstar.