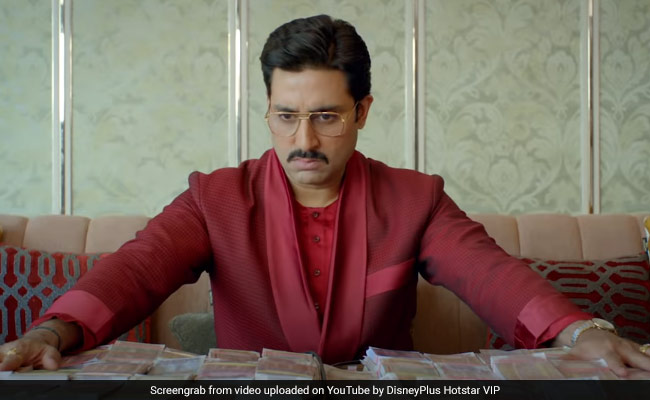 To put it simply, Abhishek Bachchan rules The Big Bull trailer. Directed by Kookie Gulati, The Big Bull is loosely based on the infamous stock-broker Harshad Mehta, who was charged for numerous financial crimes during the securities scams of 1992. Abhishek Bachchan plays the onscreen version of Harshad Mehta - his character is named Hemant Shah in the movie. The Big Bull, set in 1987, begins with a commentary on the social and financial system of India, riddled with corruption, and that's exactly where Abhishek Bachchan's Hemant Shah fits in. Hemant is introduced as an ambitious man who comes from a humble background but is determined to change his reality and bank balance.

The trailer reveals that Hemant Shah took his first step towards becoming India's "first billionaire" with insider trading - he gathered secret financial information and invests in the stock market accordingly. And once he tasted success, there was no stopping him. On Twitter, Abhishek Bachchan described The Big Bull in these words: "This was not just a scam, it was the mother of all scams."

The Big Bullalso stars Ileana D'Cruz as a journalist, who also features in the trailer. Abhishek Bachchan and Ileana co-star with Nikita Dutta, Sumit Vats, Ram Kapoor, Sohum Shah and Lekha Prajapati in the film.

The Big Bullproduced by Ajay Devgn, who also shared the trailer on social media, and so did his wife Kajol. Abhishek Bachchan's The Big Bull will release on Disney + Hotstar on April 8.