That Little Kid In Amitabh Bachchan's Arms Grew Up To Co-Star With Him. Guess Who?

Amitabh Bachchan chanced upon an old photo of himself, also featuring Karisma Kapoor and Shweta Bachchan from their childhood days. 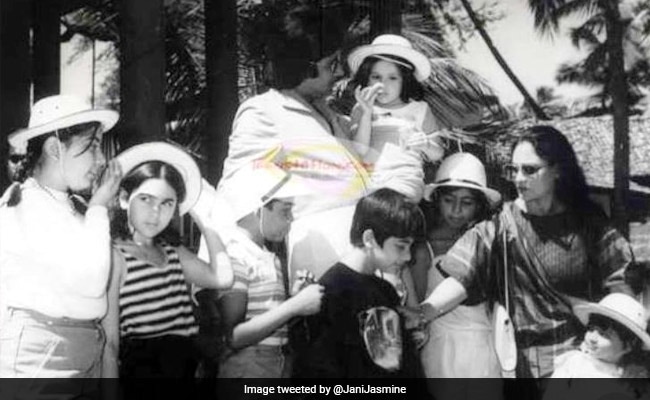 Big B in a throwback photo (courtesy JaniJasmine)

Amitabh Bachchan enjoys going through old memories and his fans often take him on a nostalgic journey by sharing priceless throwback memories. Amitabh Bachchan recently chanced upon a black-and-white photo of himself, from when he was much younger, also featuring Karisma Kapoor and Shweta Bachchan from their childhood days. In the photo, Amitabh Bachchan can also be seen holding a little munchkin in his arms, who was somewhat unidentifiable till Mr Bachchan revealed who that is. When the fan asked Big B: "Who are you holding, Mr Bachchan?", he said that's none other than a pint-sized Kareena Kapoor. Years later, Kareena Kapoor worked with Big B for the first time in Karan Johar's multi-starrer Kabhi Khushi Kabhie Gham.... Kareena has also co-starred with Amitabh Bachchan in films such as Satyagraha and Dev.

Earlier this year, Big B shared this throwback photo from the sets of 1983 film Pukar, in which he co-starred with Randhir Kapoor. Kareena, as a baby, often used to drop by on the sets of dad Randhir Kapoor's films and Mr Bachchan shared just a glimpse of one of those days. "Guess who? That be Kareena Kapoor on the sets of Pukar shooting in Goa... had come with dad Randhir... hurt her foot. .. and yours truly putting medication and taping it," he wrote. Karisma Kapoor was born to Randhir Kapoor and Babita in 1974 while Kareena Kapoor was born in 1980.

On the work front, Amitabh Bachchan has films such as Brahmastra, Gulabo Sitabo and Chehre in his line-up. He currently hosts Kaun Banega Crorepati 11. Kareena Kapoor's next film Good Newwz releases on December 27.