Amitabh Bachchan And A Tiny Kapoor On The Sets Of 1983 Film Pukar. Yes, That's Kareena

During one of her visits to the sets of film Pukar, Kareena got injured and Big B helped her bandage the wound 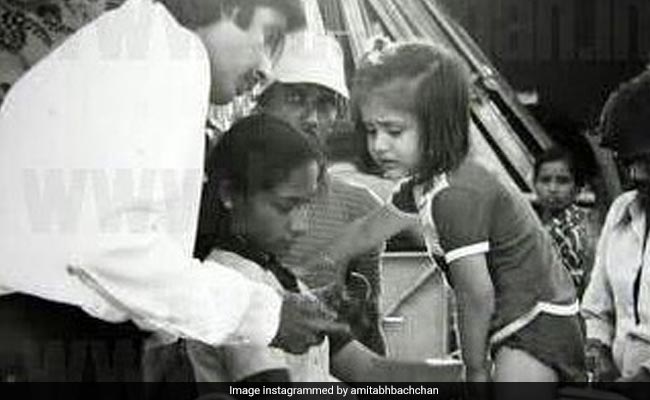 Amitabh Bachchan just made our Friday a lot better by giving us a glimpse of one of his memorable moments. The megastar shared a throwback picture of Kareena Kapoor on the sets of 1983 film Pukar- in which Big B co-starred with Kareena's father Randhir Kapoor - and Kareena's cuteness is melting our hearts. In his Instagram post, Big B revealed that Kareena visited the sets of Pukar in Goa with her dad Randhir Kapoor and hurt her foot, following which Big B applied balm on injured Kareena's foot. Amitabh Bachchan captioned the post: "Guess who? That be Kareena Kapoor on the sets of Pukar shooting in Goa... had come with dad Randhir... hurt her foot. .. and yours truly putting medication and taping it!!"

Here's the throwback picture we are talking about:

Pukar was based on Goa's struggle for independence from Portuguese rule and featured Amitabh Bachchan, Randhir Kapoor, Zeenat Aman and Tina Ambani in the lead roles.

Taking out time from his busy schedule, Amitabh Bachchan shared an interesting anecdote with us on Twitter also. The actor revealed that he is working with the same Director of Photography assistant in Chehre with whom he worked in his 1989 drama Main Azaad Hoon. However, Big B joked that over the years, both of them had lost some hair as well as grown some (pointing out at his beard). Sharing the photo, Amitabh wrote: "Time warp... then and now!! Then DOP assistant, on film Main Azaad Hoon shoot of song Itne baazu Itne Sar in Goa... now DOP assistant on film Chehre shoot ..same guys .. he and me... some hair has been lost... some grown."