"Sometimes you have to go with the flow and play with snow," wrote Preity Zinta 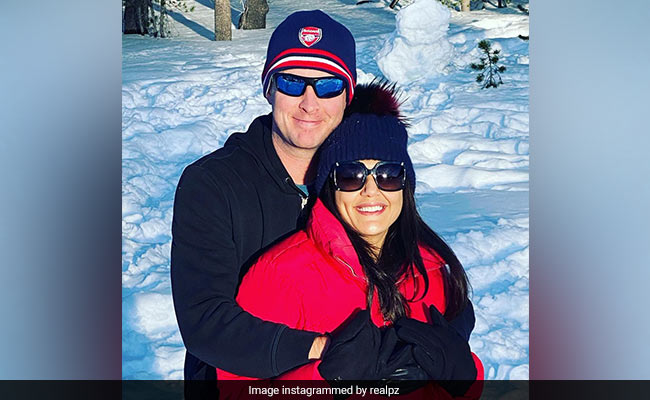 Preity Zinta, who has been staying the US for the last few years, never misses to share updates from her Thanksgiving festivities and on Thursday, she delighted her Instafam with fun-filled pictures, featuring her husband Gene Goodenough. The actress did not reveal where the pictures were taken but we can see a lot of snow in the backdrop of the pictures and the video. Posting a happy picture with her "Patiparmeshwar" as she lovingly calls Gene, Preity wrote: "Sun, snow and smiles. So much to be grateful for. #Patiparmeshwar #Thanksgiving #Break #Ting." Posting a video on her profile, the actress wrote: "Sometimes you have to go with the flow and play with snow. #Thanksgiving #Break #Fun #Holiday #Patiparmeshwar #Lovingit #Ting."

See the posts from Preity and Gene's Thanksgiving celebrations :

Sharing a loved-up picture from her Karwa Chauth celebrations from Los Angeles, Preity captioned the post: "Happy Karwa Chauth to all of you who celebrated. For me it was the longest ever - started in Dubai, cruised among the clouds and landed in LA. It was all worth it because I finally got to see my Patiparmeshwar. I love you my love. #Happykarwachauth #Patiparmeshwar #Ting ."

Preity Zinta is best known for her performances in films such as Dil Se, Lakshya, Salaam Namaste, Kal Ho Na Ho, Veer-Zaara and Dil Chahta Hai among many others. The actress got married to Gene Goodenough in 2016 and she moved to Los Angeles. However, she keeps visiting India. Preity Zinta was last seen in Bhaiaji Superhit, which released in 2018. She also featured in a small role in ABC series Fresh Off The Boat in one episode.