Thank God Review: The film is more laughable than funny. Its runtime is no more than two hours. Even at that length the film feels way too long. 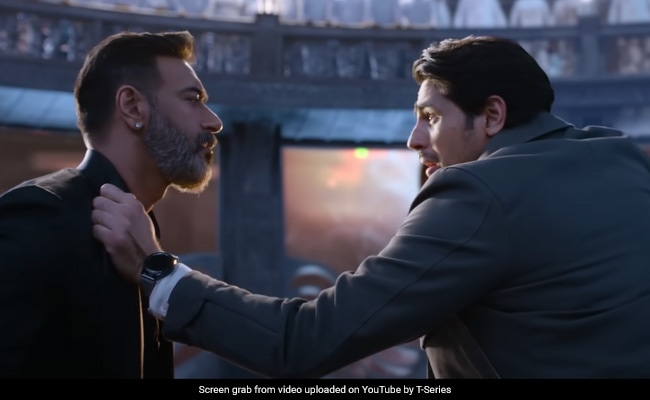 If the devil is in the details, it struts around in disguise in Indra Kumar's Thank God. In this laboured comedy about life after death, deliverance (or damnation) rests on the whims of a dapper deity who plays puerile mind games and lectures a just-dead 33-year-old man on ethics and morals. It is all drab and uninviting as hell.

Thank God is more laughable than funny. Its runtime is no more than two hours. Even at that length the film feels way too long because it makes heavy weather of conveying what matters and what doesn't in a human life. It oscillates between the mildly diverting and the crushingly leaden.

Ajay Devgn dons the guise of CG, a divine arbiter of the fate of dead humans awaiting a final decision on whether they deserve heaven or hell. Sidharth Malhotra is cast as a self-absorbed, debt-ridden, error-prone real estate broker whose life hangs by a thread after a car crash 'ends' his life.

The latter has amassed misdeeds of all manner in a short life in which he has played too loose and fast for his own good. He has been greedy, jealous, selfish, perfidious, lustful and deluded. It is now time for him to face the music at the hands of a god who is no mood to show him any mercy.

The two lead actors, saddled with rough-hewn roles that allow little room either variety or depth, strive very hard to lend energy, charm and humour to the encounter that unfolds in a computer-generated paradise. Their efforts go abegging because Thank God collapses under the weight of hackneyed and uninspired situations.

Director Indra Kumar, officially reworking a 2009 Danish film (Anders Matthesen's What Goes Around), mauls a promising premise with mothballed methods borrowed from an era of Mumbai movies long gone. The moral binary - good and bad, or sinful and virtuous, is constructed without insight or imagination.

The director of the Dhamaal and Masti movies, concoctions that rely on the broadest of strokes for comic effect, employs pretty much the same means here but mixes occasional dashes of hilarity with attempts at uninhibited mush. The result is so godawfully insipid that even a steamy Nora Fatehi item number, the umpteenth remix of Yohani's Manike crooned by the Sri Lankan crooner herself - as dull as anything else that is on show - is a blur that leaves no trace.

What is it exactly that Thank God is looking to foist upon us by way of a message? It's pretty simply. It would have us believe that good guys go to heaven and bad guys accumulate black balls while playing a 'game of life' in which a god pushes them towards hell and brings them face to face with the wrongs that they wilfully committed in life.

The man in the hot seat is Ayaan Kapoor (Malhotra), whose business has gone belly up as a result of demonetisation. Most of his money is black and he finds himself overnight in the red.

Ayaan is a married man - his wife Juhi (Rakul Preet Singh) is a police officer - with a school-going daughter who craves his time and attention. The guy is too busy dealing with his own problems to notice that he could do better as a husband and a father.

When nothing seems to be going right for the man, matters take a turn for the worse. Ayaan loses his life in a road mishap. In heaven, on judgment day, a scornful CG (Devgn) gives him a chance to return to earth by proving that he has toted up more good deeds than sins. Ayaan comes up terribly short. At the halfway mark of the film, the game is all but over for him.

But CG is a god who, despite his tough exterior, decides to be benign for a bit. He opts to give Ayaan a shot at redemption when he is a step away from being consigned to hell. Angrezi mein ek kahawat hai (there is a saying in English), CG declares to Ayaan - what goes around comes around. In other words, he explains, you reap what you sow. Did Ayaan sow anything at all that can yield a miracle now and save him? The second half of Thank God is devoted answering that question.

Two vehicles are involved in the car crash that sends Ayaan to a surgeon's operation theatre where he fights for his life. The film itself suffers a fate worse than the cars do - it is a wreck, a mangled mess that is in no shape to rev up and get going.

At one point, somebody takes a dig at Ayaan for yearning for Doordarshan in the era of streaming services. Thank God does just that - it plays a new game with the aid of outdated tools and rules. It is stuck firmly in the past although CG and YD, short for Yamdoot, are togged out in modern, western attire and they speak a contemporary lingo.

While doing everything in his power to make Ayaan pay for his misdeeds, CG cracks a joke to cheer up the mortal whose hopes dwindle by the minute. This scene relies on wordplay of the blandest sort. That is par for the course. True wit is beyond the film. There are other things in the plot that are hit by accidents, notably a house that is razed to the ground by a terrible Diwali day fire. Thereby hangs another dull tale.

From the painfully preachy and the hopelessly hollow, Thank God swings with a vengeance in the direction of the mawkish as Ayaan Kapoor, in the last quarter of the narrative, is granted an opportunity to claw his way back from the brink.

The film has no such chance. Its contrived arc and cliched plot devices do not generate any empathy for the plight of the hero and his family, which includes his mother (Seema Pahwa), another woman in his life who has faced a lifetime of neglect.

Eventually it all boils down to a pair of kidneys. The protagonist is confronted with a difficult choice. He makes up his mind. But Thank God has other ideas. If only these ideas were not as contrived and random as they are, the film might not have been reduced to a dead on arrival dud.