TGIF Mood: Neha Dhupia And Baby Bump In A "Pool Party For Two"

How cute are these pictures of Neha Dhupia 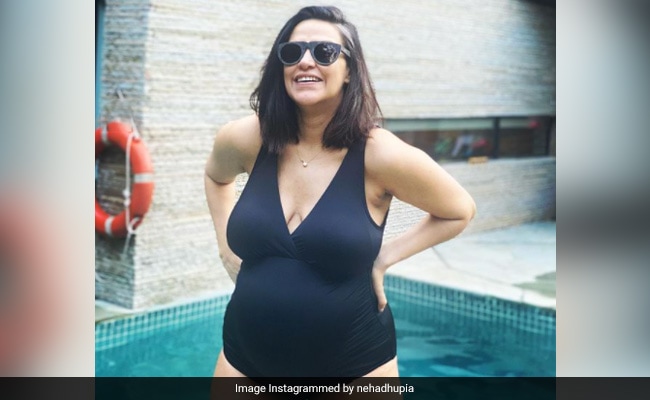 Actress Neha Dhupia, who is expecting her second child with husband Angad Bedi, loves to share posts from her maternity diaries. The actress, who often shares posts from her pregnancy and yoga sessions, decided to share pictures from her pool session. "Pool party for two," she aptly captioned it. The actress can be seen happily posing for the camera as she chills in the pool, dressed in a black swimsuit. Neha Dhupia's pregnancy glow is hard to miss in the pictures. just like us, her Instafam too loved the pictures and the comments section of her post was filled with heart reacts from her fans.

This is what Neha Dhupia posted on Friday morning:

Neha Dhupia  announced her second pregnancy on social media with a super cute post earlier this month. "Took us 2 days to come with a caption...The best one we could think of was ... Thank you, God. #WaheguruMehrKare," the actress wrote announcing her pregnancy."

Neha Dhupia married Angad Bedi at a private ceremony in New Delhi in 2018. The couple welcomed their daughter Mehr in the same year. Angad Bedi starred in the biopic Gunjan Saxena: The Kargil Girl, which stars Janhvi Kapoor in the titular role.

In terms of movies, Neha Dhupia was last seen in the short film Devi, alongside Kajol and Shruti Haasan. She also featured as one of the gang leaders on Roadies Revolution. Neha, a former beauty queen, is best-known for her performances in films such as Singh Is King, Hindi Medium, Tumhari Sulu and Lust Stories among many others.