Television Actor Jay Bhanushali, Who Is Excited For His "First Father's Day," Posted This

"I will wear your hairband today, tomorrow and forever, Tara, but I am still 10% of your cuteness," wrote Jay 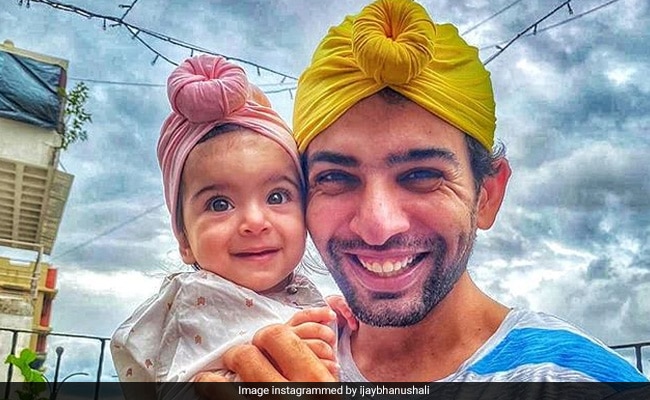 Actor-host Jay Bhanushali, who welcomed his little daughter Tara in August last year, is pretty excited for his "first Father's Day," which falls on June 21 this year. Jay and his wife, actress Mahhi Vij, became parents to Tara on August 21, 2019. The actor is all set to celebrate Father's Day later this month and his excitement spilled onto Instagram with a set of adorable photographs of himself and his daughter. Jay, On Thursday, shared cute pictures of himself and his little munchkin wearing matching headscarves. While Tara looks adorable in a printed white outfit and a pink headscarf, Jay can be seen wearing a t-shirt and a similar headband of a different colour. Tara's expressions and smile in the pictures will definitely melt your heart.

Sharing the photo, Jay Bhanushali wrote: "I am super excited for my first Father's Day. I will wear your hairband today, tomorrow and forever, Tara but I am still 10% of your cuteness. Love you" with hashtags #fatherdaughterlove and #daughtersarethebest. Reacting to her husband's post, Mahhi commented: "Uff, mine."

I am super excited for my first #fathersday with @tarajaymahhi I will wear your hairband today,tomorrow and forever but I am still 10% of your cuteness love u #fatherdaughterlove #fatherdaughtertime #fatherhood #father #daughtersarethebest

Jay Bhanushali and Mahhi Vij got married in the year 2010 after dating for several years. The couple, in 2017, adopted their caretaker's children and have been taking care of the kids' education and upbringing since then. Jay, every now and then, treats his fans to adorable pictures and videos of Tara on social media. Take a look:

Posting 4 videos before #COVID19 #lockdownindia now the question is will I. * 1-be able to take my child @tarajaymahhi in garden again 2-Enjoy watersports kayaking again 3-Do shows with a massive crowd of 15 thousand people again 4-Play sports freely and hug my team mates after taking a wicket again. I HOPE AND PRAY EVERYTHING SHOULD BE FINE AND THIS VIRUS HAS MADE US REALIZE THAT WE TOOK NATURE OUR FREEDOM OUR NEIGHBORHOOD GARDENS FOR GRANTED....REMEMBER ONE THING WHEN LOCKDOWN WAS ANNOUNCED WE DID NOT WENT TO LV,GUCCI OR PRADA SHOWROOM RICH AND THE POOR WENT TO A GROCERY SHOP FOR FOOD. MORAL OF THE STORY IS SIMPLE LIVING HIGH THINKING #lockdown #ypf #trending #foryoupage #viral #viralvid #thoughtoftheday #lockdownextended #gharbaithoindia #stayhome #staysafe

I am in love the way she gives me looks and the way she blushes when I look at her with a smile...its priceless I am a proud father and before posting this picture I was looking at it for almost 30 min..@tarajaymahhi you are very understanding girl early in the morning even if she is up she waits for us to wake up..she will keep looking at us and wait so that we feed her..she has taken cuteness quality from mother @mahhivij but patience and understanding she is on me #fatherdaughterlove #father #fatherdaughtertime #fatherhood #daughters #daughtersarethebest #daughtergoals #daughterlove