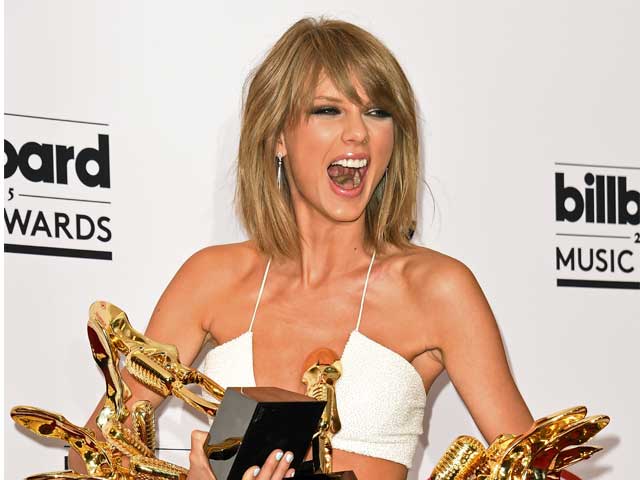 File photo of Taylor Swift at the 2015 Billboard Music Awards in Las Vegas, Nevada on May 17

New York: Taylor Swift on Tuesday topped the nominations for the MTV Video Music Awards with a pair of elaborate videos from her blockbuster album 1989.

The pop superstar will be in the running for nine awards at the August 30 gala, topping English singer-songwriter Ed Sheeran, who was tapped for six.

The host of the Los Angeles gala will be singer Miley Cyrus, who at the 2013 awards stripped down to a flesh-colored bikini and twerked with Robin Thicke - adding to her notoriety but also bringing the bottom-thrusting dance move into the mainstream.

Taylor Swift is in the running for Video of the Year for Bad Blood, which features the 25-year-old as a feminist action hero with appearances by a bevy of stars including actress Jessica Alba and rapper Kendrick Lamar.

Also in the running in two categories - Best Female Video and Best Pop Video - is Blank Space, which depicts Taylor as a romantic villain feuding with a lover at a mansion.

Blank Space is the fourth most-viewed video ever on YouTube, with more than one billion views.

Success at the MTV Video Music Awards would be the latest triumph for Taylor Swift, whose 1989 was the fastest-selling album in the United States in 12 years.

Sheeran was also nominated for Video of the Year for Thinking Out Loud, which shows him ballroom dancing.

Beyonce was nominated in five categories including Video of the Year for 7/11, in which she dances in a variety of locations including a hotel balcony, a bathroom and in front of a Christmas tree.

Miley Cyrus announced her participation with a picture on social media that showed her disguised as an amphibian-like alien, with a sign that read 'MTV Won't Let Me Perform.'

It was followed up by an unmasked Miley Cyrus with a second placard: 'So I'm hosting this year's VMAs.'