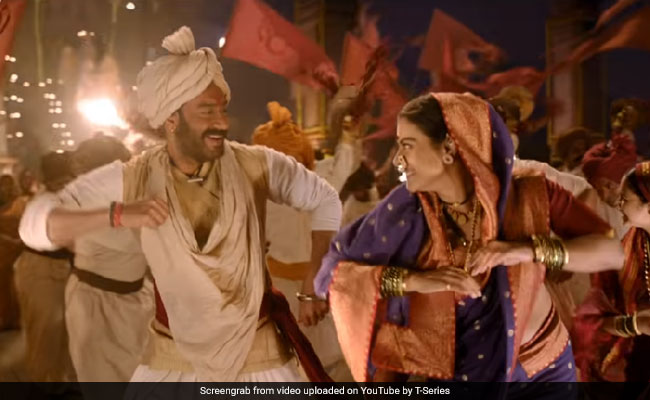 The wait is over for Tanhaji: The Unsung Warrior trailer. Ajay Devgn and Kajol, who will be seen together on the big screen after a long hiatus, shared the much-awaited trailer of period piece Tanhaji: The Unsung Warrior. "Feb 4, 1670: The surgical strike that shook the Mughal Empire! Witness history like never before. Presenting the Tanhaji trailer," they wrote on Twitter. Ajay Devgn features in the titular role as warrior Tanaji Malusare - Maratha ruler Chhatrapati Shivaji's general - while Kajol plays his feisty wife Savitribai Malusare. Saif Ali Khan features as Tanaji's nemesis Uday Bhan, who attacked the hill fort of Kondhana during the battle of Battle of Sinhagad on Feb 4, 1670 during Chhatrapati Shivaji's rule. Tanaji - the titular "unsung warrior" - died fighting Uday Bhan but secured the hill fort of Kondhana for the Maratha empire during the battle. After the battle, Chhatrapati Shivaji renamed the hill fort of Kondhana as Sinhagad or 'lion's fort' as a tribute to Tanaji's bravery.

The three-and-a-half-minute trailer of Tanhaji: The Unsung Warrior begins with how his father's death during a battle for swaraj for the Maratha empire shaped Tanaji's childhood as a warrior in the making. Then it fast-forwards several years to when the once sword-yielding-amateur Tanaji is now Subedar Tanaji Malusare, the only one who can resist the rowdy Uday Bhan at the battle field, who plays by no rules. "Teri zasbaat mitti se judi hai... aur meri akal paani se. Tu jaan de sakta hai... aur mein jaan le sakta hun," Uday Bhan tells Tanaji in the trailer, when he replies: "Har Maratha pagal hai... Swaraj ka... Shivaji Maharaj ka... Bhagwa (Maratha flag) ka."

Epic battle scenes follow next, punctuated by glimpses of Tanaji as a family man. Kajol's character Savitribai Malusare features in emotional scenes with Tanaji and then in powerful sequences as Tanaji goes to battle.

Watch the trailer of Tanhaji: The Unsung Warrior here:

Directed by Om Raut, Tanhaji: The Unsung Warrior will release in 3D and is slated to hit screens on January 10, 2020.