Tamannaah Bhatia "Feels Like A Goddess" Only When She...

Tamannaah's latest pictures received a whole lot of love from her friends such as Samantha Ruth Prabhu, Vidyulekha Raman and Esha Gupta on Instagram 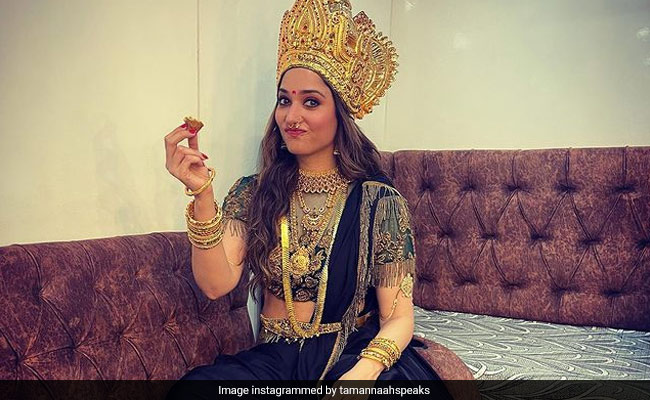 When do you feel like a god or goddess? For Tamannaah Bhatia, it's only when she "eats on a banana leaf," because it's the "new religion lifestyle." The actress, on Wednesday, posted two amazing pictures of herself dressed as a goddess and eating what appears to be idli-dosa on a banana leaf. Her happiness can easily be seen on her face in the photos, sharing which she wrote: "I feel like a goddess when I eat on a banana leaf! It's easy to find, and great for the environment too! Going back to the roots one step at a time!" Tamannaah also added hashtags such as #backtotheroots #simpleliving #bananaleaf #yummyinmytummy #healthylifestyle and #thenewreligionlifestyle.

Tamannaah fans also loved her goddess look and dropped comments such as "killer look" and "you are everyone's goddess."

Tamannaah Bhatia is a renowned south actress who is best-known for her performances in films like Baahubali, Devi and Sye Raa Narasimha Reddy, to name a few. Tamannaah Bhatia has also worked in Bollywood movies such as Entertainment, Himmatwala and Humshakals. She was last seen in Telugu film Maestro.

Tamannaah will next be seen Bole Chudiyan, co-starring Nawazuddin Siddiqui. Her upcoming projects also include That Is Mahalakshmi (a Telugu remake of the 2014 hit Queen) and Gurthunda Seethakalam.