"She is my senior and if I ever see her in my vicinity or around me, I can go and say hello to her," said Taapsee Pannu 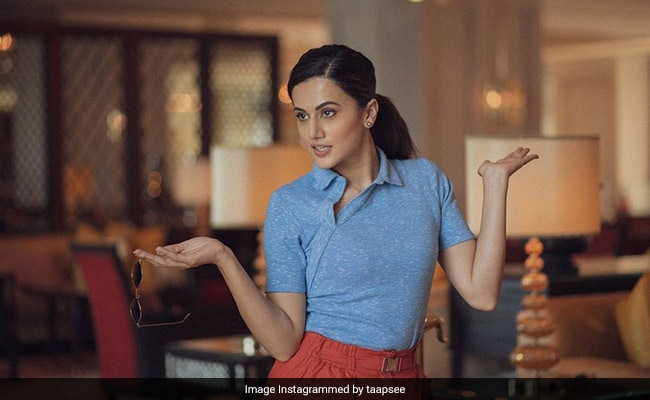 Taapsee Pannu, recently interacted with the media at a promotional event, wherein she was asked about being called "sasti copy" by Kangana Ranaut's sister Rangoli Chandel, who doubles up as the actress' manager and represents her on Twitter. The Mulk actress, cryptically hinting at Rangoli Chandel's remarks said that she considers "Kangana a very good actress" and that she is "not affected by anything that she says", reports news agency PTI. Taapsee Pannu found herself on the receiving end of brutal criticism from Kangana Ranaut's sister Rangoli Chandel earlier this year, after she didn't mention Kangana's name in an appreciation tweet for the trailer of Judgementall Hai Kya?. Rangoli referred to Taapsee as a 'sasti copy' of Kangana.

During the interview, Taapsee said, "For me, Kangana is a very good actress, she was and she still is... But other than this, she doesn't affect me in my life. It doesn't affect me what she says. There are a lot people saying lot of things on my Twitter timeline." The Mulk actress added that she has never spoken to Kangana but since she happens to be her senior in the industry, she wouldn't mind greeting her. "I have never spoken to Kangana. She is my senior and if I ever see her in my vicinity or around me, I can go and say hello to her. I have no qualms about it," PTI quoted Taapsee as saying.

When Taapsee was asked about the lack of acceptance from peers in the film industry, Taapsee told PTI: "Actors are not giving me work so what should I do of their validation. I used to feel bad about it earlier now I am used to it. If I get it, I will be shocked. The person you are talking about (Kangana), I have not got validation from her. My attempt was to say good stuff but..."

Taapsee Pannu is best-known for her performances in films such as Pink, Naam Shabana, Soorma, Mulk, Manmarziyaan and Badla among others.

On the work front, Taapsee Pannu was last seen in the thriller Game Over. Taapsee has an impressive line-up of films which includes the biopic Saand Ki Aankh and Tadka. She will next be seen in Mission Mangal, co-starring Akshay Kumar, Vidya Balan, Sonakshi Sinha, Kriti Kulhari and Sharman Joshi, in the pipeline.