"Looks like you are having an amazing time," wrote Taapsee's Mission Mangal co-star Sonakshi Sinha 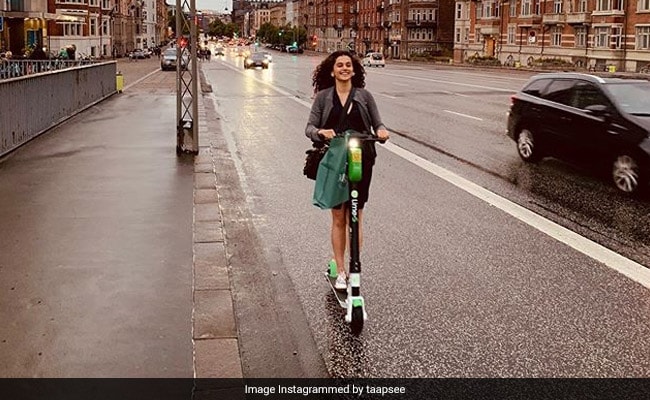 Taapsee Pannu celebrated her birthday in the coolest way possible. The actress, who blew 32 candles on her birthday cake on Thursday, gave a glimpse of her birthday celebrations by sharing a picture on Instagram. Taapsee opted for a low-key birthday celebration (she didn't disclose the destination in her post). In the picture, the Mulk actress can be seen happily riding a Segway. "Crossing another milestone in this joyride called life and important safety measure to learn is, don't take yourself too seriously. Now, beep-beep! Make way for my chariot," she captioned the post.

Taapsee's post was flooded with birthday wishes from fans and well-wishers. Taapsee's Mission Mangal co-star Sonakshi Sinha also wished the actress in the comments and she wrote: "Happiest birthday Taps! Looks like you are having an amazing time, so that's covered. See you soon, and we shall celebrate with our whole team."

Taapsee Pannu is best-known for her performances in films such as Pink, Naam Shabana, Soorma, Mulk, Manmarziyaan and Badla among others.

On the work front, Taapsee Pannu was last seen in the thriller Game Over. Taapsee has an impressive line-up of films which includes the biopic Saand Ki Aankh, co-starring Bhumi Pednekar and Tadka. She also has Mission Mangal, co-starring Akshay Kumar, Vidya Balan, Sonakshi Sinha, Kriti Kulhari and Sharman Joshi, in the pipeline.