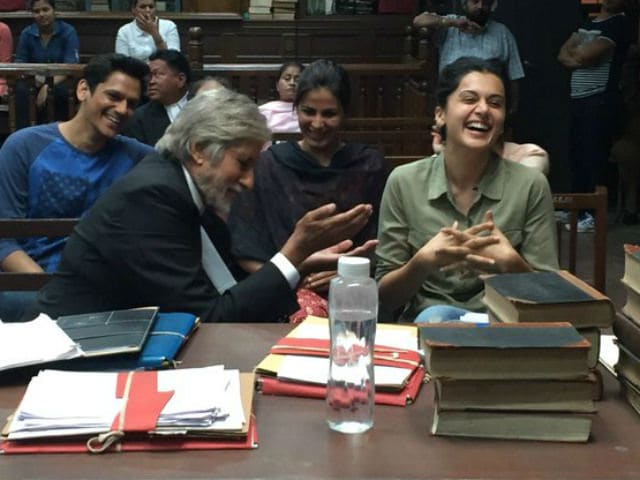 Mumbai: Actress Taapsee Pannu, who will be seen sharing screen space with Amitabh Bachchan in PINK, feels it will be a landmark film for her. Directed by Bengali filmmaker Aniruddha Roy Chowdhury, PINK features Amitabh Bachchan, Pannu and Kirti Kulhari in the lead.

"PINK with Mr Bachchan and standing next to him and doing the film was an amazing experience. I think this film will be a landmark movie in my career," Taapsee told PTI.

Produced by Rashmi Sharma and Shoojit Sircar, the thriller film is set in Delhi.

"PINK was psychologically affecting me a lot as it was a stressful film to do," the 28-year-old actress said.

Taapsee said that she shot her first scene with Mr Bachchan in Delhi and tried her best to remain calm throughout the shoot. "I am good at psychologically conditioning my brain so when I was shooting with him (Amitabh Bachchan), I was like forget he is Mr Bachchan, just treat him like your co-star. I am not a trained actor I need to be totally at ease to act," she said.

"If I would have thought that I am acting with Mr Bachchan, I wouldn't have been able to act at all. But on the last day of the shoot, I behaved like a crazy fan and did lot of mad things with him," she said.

The Baby actress was amazed with the dedication that the megastar has for his work even today at this age.

"His (Amitabh Bachchan) patience is amazing. He rehearses for hours and I don't have the stamina to rehearse for so many hours," she said.

PINK is slated for release on September 16. Taapsee will also be seen in Prakash Raj's Tadka and Ghazi alongside Rana Daggubati.