Swing Time For Alia Bhatt On The Sadaks Of Ooty 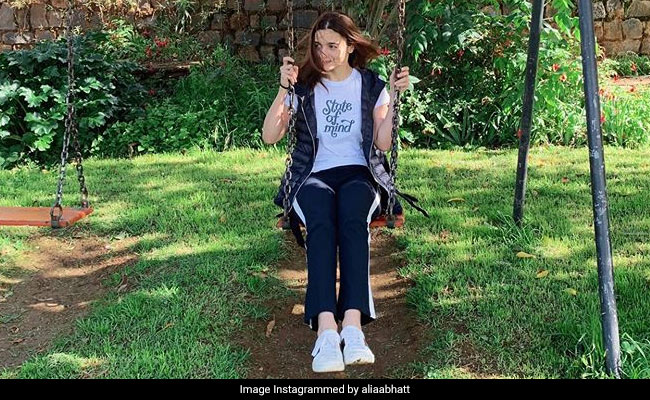 Alia Bhatt is sharing pages from her Ooty diaries on Instagram every now and then and her recent post is about how she's swinging her way to Fri-yay feels. On Thursday, Alia Bhatt's Instafam woke up to a photo of hers unwinding on a garden swing, which she captioned: "Don't forget to play." The 26-year-old actress is shooting for upcoming movie Sadak 2 in the hill station. Sadak 2 is being directed by Alia's filmmaker father Mahesh Bhatt and also stars Pooja Bhatt. Alia Bhatt has also been joined by her mother Soni Razdan and sister Shaheen Bhatt in Ooty, which means they are having a major fam-jam in the hills.

Here's how Alia Bhatt switched on her 'play' mode from her work-and-play trip to Ooty:

Earlier, Alia Bhatt had added a delightful entry to her Ooty album on Instagram, featuring herself, Shaheen Bhatt and Soni Razdan, which was all about "A whole lotta love."

Sadak 2 is a sequel of sorts to Mahesh Bhatt's 1991 thriller Sadak. Alia Bhatt co-stars with Aditya Roy Kapur in Sadak 2 while Sadak originals Sanjay Dutt and Pooja Bhatt are also part of the ensemble cast. While the 1991 film had a eunuch Maharani played by Sadashiv Amrapurkar as the antagonist, the sequel will have Makarand Deshpande as a villainous godman. Alia Bhatt's character in the movie will reportedly focus on exposing the godman while Sanjay Dutt will help her on her quest.