Surveen Chawla: I Can Kiss A Co-Star Or Go Nude For Film, My Husband Won't Say Anything 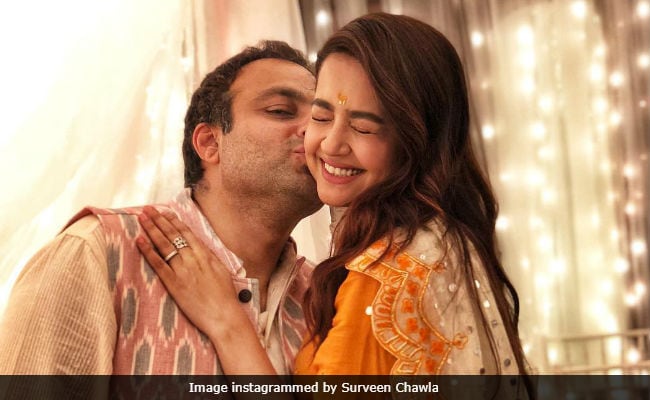 New Delhi: Actress Surveen Chawla, who is currently on a vacation in Cape Town with her husband Akshay Thakker, told Times Of India that marriage has made her life "more beautiful." Surveen Chawla married her longtime boyfriend Akshay Thakker in Italy in 2015. However, she kept it a secret till December 2017, when she shared photos from her wedding album. Speaking to Times Of India, Surveen said that her husband supports her professional choices. "I could kiss my co-actor or even go nude on screen, I can do whatever the script demands in a film and my husband will not say anything about it. That's the kind of understanding I have with him. My husband is supportive of my work and I got a companion for life, what more can a woman ask for?" she said.

Surveen Chawla started her career as an actor on the small screen starring in a string of K-soaps by Ekta Kapoor. She debuted in Kahin To Hoga and went on to star in shows such as Kasautii Zindagi Kay and Kaajjal. She debuted in Bollywood in 2011's Hum Tum Shabana but her breakthrough film was Hate Story 2, which arrived in 2014. Surveen has also featured in Punjabi and Telugu films.

Promoted
Listen to the latest songs, only on JioSaavn.com
"I don't think actresses should wait. When I get a good film project, it is Akshay who says, 'Go for it'. That's what partnership is all about. Today, many actresses get married, have babies and make a comeback. The perception with married actresses is changing and it will change further in the future," she added.

Surveen was last seen in 2015 film Parched and she recently featured in Haq Se, a web-series by AltBalaji (owned by Ekta Kapoor).