Super 30 is expected to pick up pace over the weekend 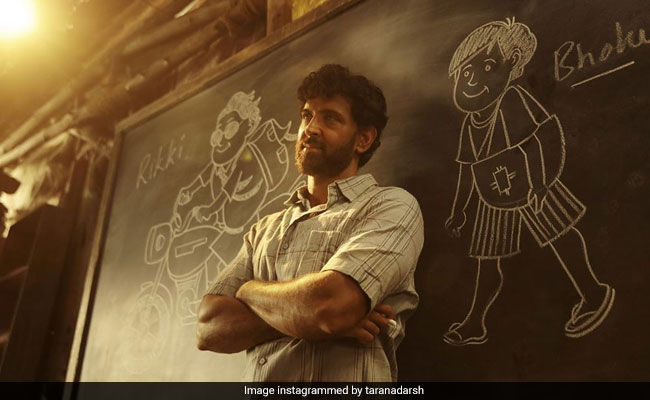 Hrithik Roshan in a still from Super 30. (Image courtesy: taranadarsh)

Super 30, starring Hrithik Roshan has earned Rs 132.61 crore within three weeks of its release, reports Bollywood trade analyst Taran Adarsh. In his tweet, Taran Adarsh stated that the film is expected to perform well over the weekend. The film, which is based on the life of mathematician Anand Kumar, witnessed a dip in its business on Friday as it collected Rs 96 lakh. Sharing the film's box office report so far, Taran Adarsh tweeted: "Super 30 should pick up pace on (fourth) Sat and Sun... [Week 4] Fri 96 lacs. Total: Rs 132.61 cr. India biz."

Super 30 had a decent start at the box office and it collected over Rs 11 crore on its opening day. The film is based on Anand Kumar's life, who coaches students from economically weaker sections for the entrance exams of the IITs.

The film opened to mixed reviews from film critics. Saibal Chatterjee, in his review fro NDTV, gave the film a two-star rating and wrote: "Hrithik Roshan is nearly as horribly miscast as Anand Kumar as Priyanka Chopra was as Mary Kom. Not that the lead actor does not give the role his all. His enthusiasm never flags. However, his darkened skin tone and off-the-mark Bihari accent, which fluctuates wildly, get in the way of lending authenticity to the portrayal."

Super 30 also features Mrunal Thakur. The film has been directed by Vikas Bahl and it has been collaboratively produced by Nadiadwala Grandson Entertainment, Phantom Films and Reliance Entertainment.