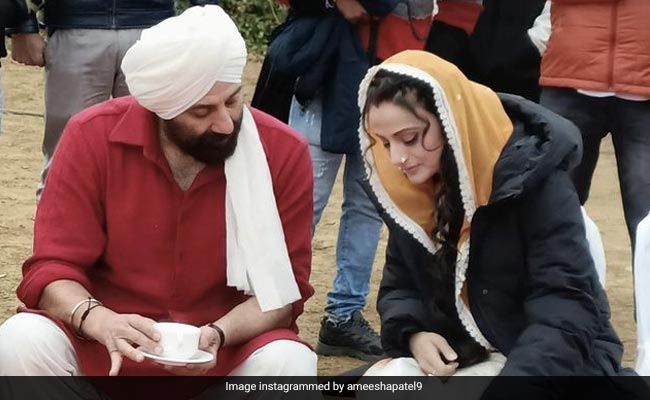 Sunny Deol and Ameesha Patel on the set of Gadar 2. (Image courtesy: ameeshapatel9)

Sunny Deol and Ameesha Patel are reuniting for Gadar 2, one of the most awaited sequels of the last two decades. As shooting for the film began on Wednesday, the lead cast promised updates and photos from the sets of the period film. And as promised, Sunny Deol and Ameesha Patel have shared images from the sets of Gadar 2 and it is making us nostalgic. The post shared by Sunny Deol features a side profile of the actor in a red kurta and white turban. Sharing the picture, the actor mentioned only a hashtag in the caption that said, “Tara Singh” which is the name of his character in Gadar and Gadar 2.

Soon enough, Ameesha Patel shared a picture from the sets of the film in which she is seen alongside Sunny Deol. In the image, Sunny Deol is seen with a teacup in hand. Both Ameesha Patel and he appear to be examining something on the actress' feet. Sharing the picture, Ameesha Patel wrote, “Gadar 2 shoot mode .. Tara Singh (Sunny Deol) and Sakeena (me) in deep conversations… Any guesses what we are talking about?”

On the first day of the shoot, Ameesha Patel shared images of the first shot of the film. In the caption, she wrote, “Gadar 2. Muhurat shot. The General was kind enough to grace the occasion.”

She also shared another image in which Ameesha Patel and Sunny Deol are seen in their costumes. Also in the frame is the director of the film, Anil Sharma along with army officers.

Gadar 2 is the sequel to the superhit 2001 film Gadar. In addition to Sunny Deol and Ameesha Patel, Utkarsh Sharma who played the role of the couple's son in the first film will be reprising his role in the sequel as well. Utkarsh Sharma is the son of director Anil Sharma.  The film is produced by Zee Studios and Anil Sharma Productions.