Suhana Khan tried her luck with accessorising and the results were impressive. 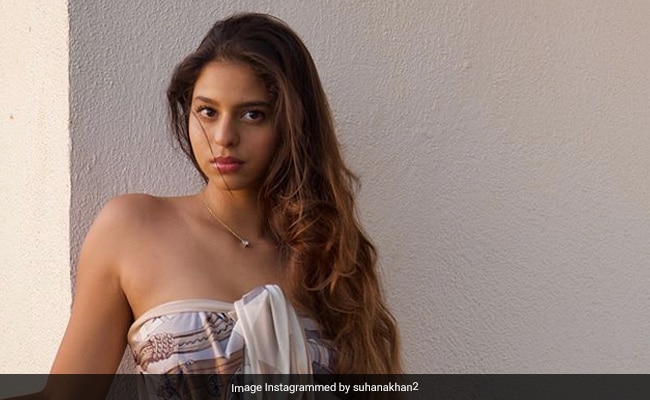 Actor Shah Rukh Khan's daughter Suhana tried her luck with accessorising and going by the compliments in her comments thread it appears that her styling game was on point. Suhana shared pictures of herself focussing on her many bracelets, petite necklaces and rings and captioned the post, "Details." In the comments thread, her cousin Alia Chhiba, and friends Shanaya Kapoor and Navya Naveli left their opinion. Alia wrote, "Amaze" while Shanaya Kapoor, daughter of Maheep and Sanjay Kapoor, commented: "Yes sue, making us proud" (FYI, Suhana's friends nicknamed her Sue). Navya Naveli, daughter of Shweta Bachchan Nanda, wrote, "Quite artsy of you." 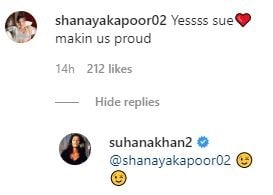 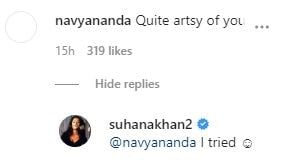 Shanaya Kapoor along with actress Ananya Panday are among Suhana Khan's close friends - the trio frequently share BFF posts for each other on social media. Ananya, daughter of Chunky and Bhavna Panday, debuted in Bollywood with 2019 film Student Of The Year 2 while Suhana and Shanaya are aspiring actresses (not counting Suhana shot film debut).

Suhana Khan starred in a short film The Grey Part Of Blue, which released online last year. Suhana, who featured on a magazine cover in 2018, talked extensively about her desire to become an actress. Suhana Khan has studied films at England's Ardingly College. Meanwhile, Shanaya worked as assistant director in her cousin Janhvi Kapoor's upcoming film Gunjan Saxena: The Kargil Girl. Her father Sanjay Kapoor confirmed that her goal is to make it big in front of the camera.