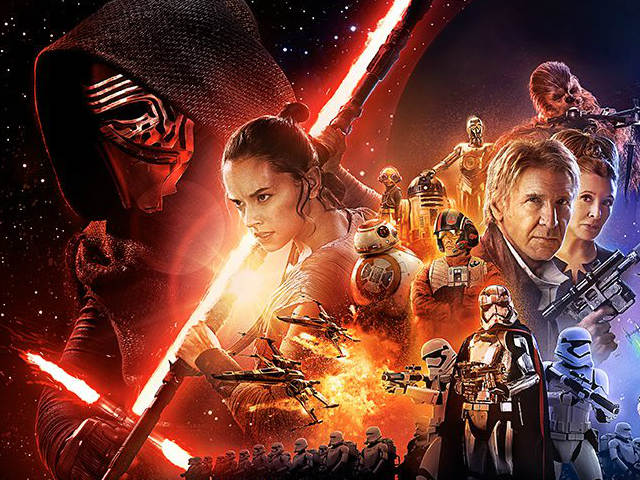 This image was posted on Facebook by Star Wars: The Force Awakens

(EDITORS: Caution - it's not just that spoilers lie ahead, but rather: As a veritable minefield, this entire piece essentially IS a spoiler.)

"Part of the secret to screenwriting is to confuse the audience - then give them a sense of clarity at the end."

Because whether you're writing for Buzz Lightyear or Luke Skywalker, your accepted mission in plotting a sequel is to advance the longer arc while making sure the nostalgists are given a reason to stay with the group.

And now, in penning the Force script with director J J Abrams and veteran Jedi scribe Lawrence Kasdan, Arndt (who also lent his hand to the Hunger Gamesfranchise) sought to bring both confusion and then clarity to a cinematic galaxy embraced so passionately by generations - yet one derided so vociferously for its prequels.

Hyper-aware of this, the screenwriters chose a smart/safe film-trade route: They went back to the '70s origins. If they were going to recapture a Star Wars audience that was resting a new hope in Abrams's steady hand, then they would literally, and literarily, return to "A New Hope."

As a result, this new Episode VII uncannily shares many story beats with Episode IV - from the humble, Force-sensitive desert-planet dweller who, robbed of guardians, connects with a paternal figure, to the climactic action that involves a trench run to take out a deathly star base.

What viewers get, in turn, is a Rorschach test of a film - blots of a plot rendered in light and dark. Fans who are relishing Force Awakens bask in the high nostalgia factor, and take a liking to the new characters, even though the newbies' actions constantly reflect precise plotting nods to George Lucas's '77 blueprint. The resonance is in the echoes. (Also Read: 10 Star Wars Secrets Only a True Fan Would Know)

Critics and carpers of the new film, however, see the plot as a too-easy over-reliance on the story grooves that Lucas long ago dug. Amid what they see as lack of innovation and bold new paths, they essentially never feel confused enough to need ultimate clarity. For them, storytelling familiarity breeds contempt.

Amid this battle over story, fellow Washington Post writer David Betancourt and I break it down:

MICHAEL CAVNA: So from the early scenes, when a humble, young hero-to-be on a sandy landscape encounters a pivotal droid who holds crucial data, the echoes are strong between Episodes IV and VII. What did you think of the many similarities?

DAVID BETANCOURT: There were lots of similarities, but I think that was the safest way to go for J J and the crew trying to re-establish the Star Wars universe. The same people saying TFA was too much like Episode IV would have been just as critical if they ignored previous successful templates and went with something completely new. Episode VII was not the time to roll the dice with Star Wars. But now that we're all hooked, maybe episodes VIII and IX will bring newer ideas and take more chances. Then again I was a lightsaber purest and initially against Kylo Ren's squigly cross lightsaber, so what do I know?

MC: J J and his co-writers obviously had an ongoing juggling act in terms of narrative, balancing the boldness innovation and the comfort of nostalgia. (Star Wars actor and Abrams pal) Greg Grunberg told me this was "Star Wars reinvested," so I really do think J J, for this film, needed to get as many people back on the metaphorical Millennium Falcon as possible. So as you were watching it, did you find the narrative familiarity more comforting and off-putting? What were your in-the-moment reactions as a viewer?

DB: To me, it was comforting. I loved the family dynamic mixed with mystery. When Kylo Ren is informed that his father is involved in some Resistance interference and you realize Han Solo is his father and Leia is his mother, that was my "I am your father moment." I'll never forget where I was the first time I heard that. I imagine that's what it felt like when people first found out that Vader was Luke's father. We can't just assume everyone is caught up on Star Wars and therefore wants something new and never before seen. Some fans have the Star Wars basics down, but were too young to experience the hype when the movies were originally released. So if you fall in that category, TFA feels more like magic than repetitive.

MC: Agreed. I've seen the film twice now, and the familiar narrative beats feel of a piece with how decidedly J.J. steers into the nostalgia. My reaction might be very different if "TFA" were only all-new characters tripping through the same plot points. But for viewers, this film serves as a safe bridge across several decades. So when Han says to Chewie, "We're home!," that to me is like shooting up a writer's flare that announces, "This affair is going to be a reunion alongside new-pledge week." SO, were there any callbacks to Ep-4 that you especially liked? And any that particularly bothered you, of that you might have cut? ...

DB: I love Rey's path to discovery and how similar it is to Luke's. And if it turns out that Rey is Luke's daughter (something we still don't know), I love how the path to the Force starts with both of them inheriting their father's lightsaber. Kylo Ren's obvious Darth Vader influence even down to the altered voice. No James Earl Jones, but I thought he sounded really cool. Just like Vader, when the mask comes off its an "oh my gosh" moment. Some though Kylo came off like a whiny teenager, I thought he came off a little like a young Anakin Skywalker. Only dislike I had was that Lupita's character was animated.

MC: No disrespect to Andy Serkis, but: When it comes to CGI, it was a bit disappointing to "lose" Lupita - she of the greatly expressive acting face - to digital animation, but my her acting was wonderful. As for the story beats: I soon just acknowledged that JJ's plan was to put new characters in very familiar situations. Rey is such a blast of fresh air, and Kylo Ren is such a moody, brooding, arrested-development kid feeling the pressure of trying to go into the family business, that the air didn't feel too stale; I liked the balance of old and new. Now, though, about the similar big battle plans - let's fly down a long corridor and blow up the Imperial Death Star base! - I did think JJ could have strayed farther there from Episode IV. So is there anything you'd change on JJ's balance levels between nostalgia and innovation?

DB: Agreed on the Death Star comparison. Too much tribute and you have Superman Returns. But it doesn't ruin the experience. I think they're more so concentrating on the next generation. So if older more knowledgeable fans feel deja vu, well, maybe that's the one sacrificial lamb. We may feel like we've seen it before, but what about the 8 year old seeing this for the first time? But as far as TFA goes, I wouldn't change hardly anything. I thought it was well executed. Maybe not so many silly jokes, but again, the kids. It's all about the kids.