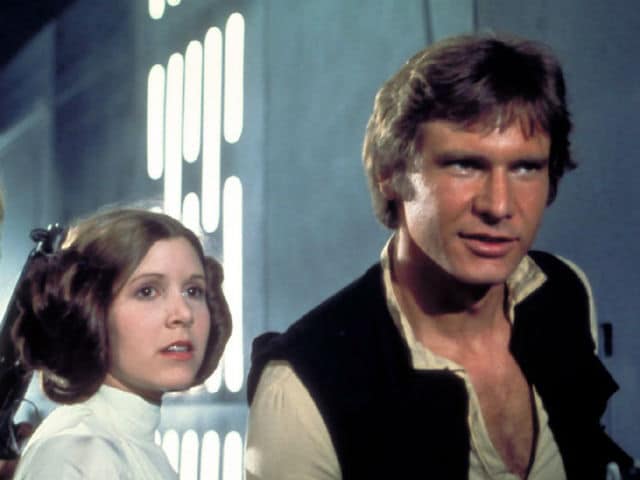 Harrison Ford as Han Solo and Carrie Fisher as Leia in a still from Star Wars.

I am not a Star Wars super-fan. Before this past weekend, my Star Wars knowledge included vague memories of seeing a few (but not all) of the movies and playing the theme song countless times with my high school marching band.

However, with everybody talking about The Force Awakens, I decided it was time to bone up on the series. So I binged on Episodes IV through VII this weekend. As relationship writer, I paid close attention to the dynamic between Leia and Han Solo. I know theirs is a culturally revered relationship, but it doesn't seem so enviable to me.

I get it, young or old Harrison Ford is an asteroid-dodging, Storm Trooper-shooting hunk. But Leia, let's talk about Han. From the moment you met, he comes off as creepy and conceited. He seems like a guy who's wrong for you, but you love him anyway. No wonder it ended in such a mess. (Also Read: Star Wars: The Force Awakens: Tribute to Original or Plain Copying?)

But let's start at the beginning.

1. He's only rescuing you for the money.

Leia, you and Han wouldn't have met if it weren't for your brother, Luke Skywalker, being entranced by your beauty. (Gross, I know, but he - and we, the viewers - doesn't yet know that you're related.) Luke convinces Han to rescue you, but he's only after your wealth. "She's rich ..." Luke whispers in Han's ears, which suddenly perk up.

I don't have to tell you this - you're a smart and powerful woman. You know right away that Han has no idea what he's doing trying to spring you from the Death Star. "Looks like you managed to cut off our only escape route," you say to Han, who retorts: "Maybe you'd like it back in your cell."

Ushering everyone into and eventually out of the garbage chute, Leia, you're the real knight in shining armor here.

3. He doesn't respect your authority.

You're a princess; he's a lowly smuggler. And no matter how strongly you tell him that you're in charge, he just doesn't get it, does he?

This is about the point where it becomes obvious that Han's surname really fits. He prefers to fly solo - and he lets you know that he's not in this for the revolution or for you. "I expect to be well-paid," he tells you outright.

4. His come-ons are creepy and presumptuous.

By the beginning of The Empire Strikes Back, Han is still subverting your authority, facetiously calling you "sweetheart" and "your worship"; kudos to you for calling him on it and telling him to stop. But his self-confidence is also quite sleazy. Consider this moment, when Han catches you when you fall:

Leia: Captain, being held by you isn't quite enough to get me excited.

Han: Sorry, sweetheart. We don't have time for anything else.

Um, gross. At this point, you haven't been physical yet - the only "interest" you've shown in Han is in his technical abilities. To viewers who don't know that you two will end up falling in love - that scene and the one where Han sneaks up behind you while you're working, saying you need more scoundrels in your life? Those interactions feel more date-rapey than romantic.

I get it, surviving intense threats on your life, with the fate of the galaxy hanging in the balance, can bond two people. But what happens after that "I love you; I know" moment that everyone loves? Right after you confess your feelings for this self-assured smuggler, he becomes, quite literally, the most unavailable man in the universe.

6. The only time it's not all about him is when he feels threatened.

Toward the end of The Return of the Jedi, you and Han share this tender moment when Han senses your feelings for Luke.

Han: You love him, dontcha?

Han: All right, I understand. Fine. When he comes back, I won't get in the way.

Leia: It's not like that at all. He's my brother.

Han's offer to get out of the way could be seen as selfless - or it could be self-preserving. After all, a mere smuggler knows he's no match for a Jedi master.

Han tries to put a positive gloss on their relationship and all you, Leia, can say is: "Some of it."

That's classic Han-Leia banter, but it's also pretty depressing. If, after a long relationship, all you have to say is: Well, it wasn't all bad, that doesn't sound that much like true love to me. Since that kiss in the forest, you've created a child, Kylo Ren, who's more like his grandfather than the two of you; it's hard to feel good about a union after that.

8. When Han is killed, you feel it, but we don't see you mourn or fall apart.

In this moment, you display the stoicism of a general but little human emotion. I'll take that as your understanding that this match was a bad one all along.