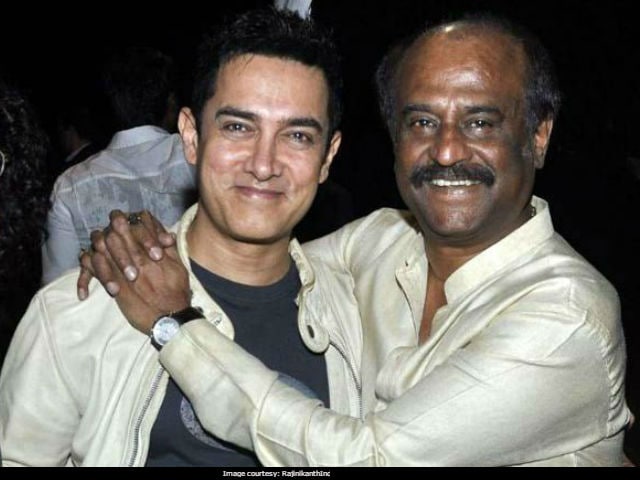 This is the first time Aamir, Rajinikanth will share screen space (courtesy: RajinikanthInd)

New Delhi: Baahubali director SS Rajamouli is already planning to keep himself busy after the second part of the epic drama releases in April. The National Award-winning director is reportedly considering making a film on mythological epic Mahabharata, which also inspired his Baahubali: The Beginning. But what's interesting is that Rajamouli wants to have an ensemble cast headlined by megastar Rajinikanth, and also featuring superstar Aamir Khan and Malayalam star Mohanlal, reported Bollywood Life. "He is thrilled about Mahabharata," Bollywood Life quoted a source as saying. However, SS Rajamouli has not yet assigned roles for the three actors, reported Bollywood Life. SS Rajamouli is currently busy shooting the remaining portions of Baahubali: The Conclusion, which is scheduled for April 28.

"Rajamouli is currently busy with Baahubali 2, but he is thrilled about Mahabharata. He wants to take Aamir Khan, Rajinikanth and Mohanlal on board for this project. He is yet to decide on the characters these stars will portray," Bollywood Life quoted a source as saying.

Rajamouli has reportedly zeroed in on a cast comprising actors from Bollywood and the southern film industry because he wants the film to cater to a wider audience. Rajamouli's ambitious project will reportedly be shot in Tamil, Telugu and Hindi.

Earlier last year, Aamir Khan confessed that that he is a "huge fan" of the director and that he would love to collaborate with him, reported news agency IANS. Surprisingly, the 51-year-old actor mentioned a probable movie on Mahabharata in his statement. "I'm a huge fan of Rajamouli's work and if he ever plans to make Mahabharata, I'd love to play Krishna or Karna. I might actually go with Krishna," he told IANS.

Promoted
Listen to the latest songs, only on JioSaavn.com
Aamir and Rajikanth have earlier co-starred in 1995 film Aatank Hi Aatank. Ahead of the release of Dangal, Aamir revealed that he missed a possible collaboration with Rajinikanth. Aamir, who approached Rajinikanth to dub for Dangal, said: "I did approach Rajini sir and he loved the film. After discussing with him both he and I felt that his voice is too recognisable. He is so popular that his voice won't suit my face. We both felt that. But he loved the film. He was very encouraging," he told Indian Express.

SS Rajamouli's Baahubali: The Beginning continues to be the highest grossing Southern film and stars actors Prabhas, Rana Daggubati and Anushka Shetty, all of who will reprise their roles in the second part. Meanwhile, Aamir Khan rounded off 2016 on a blockbuster note with wrestling drama Dangal. He will next be seen in Thugs Of Hindostan, co-starring Amitabh Bachchan. Gangster drama Kabali was Rajinikanth's last movie. He is currently awaiting the release of 2.0.