New Delhi: On Diwali, social media is lit up with fireworks in the form of posts shared by Bollywood celebrities, who continue to add glitter to the celebrations. We bring you a lowdown of what the festival of lights looks like at various celeb counters. It's okay, you can thank us later. It's Diwali after all.

Sridevi shared a picture with daughter Khushi, both of who were dressed in shades of pastel, courtesy Manish Malhotra couture at Ekta Kapoor's Diwali party. Sridevi, wore an embellished sharara and accessorized with a gold clutch while Khushi blended chic and traditional with a lehenga and off-shoulder choli.

We will not even attempt to decide who scored better on the fashion meter. 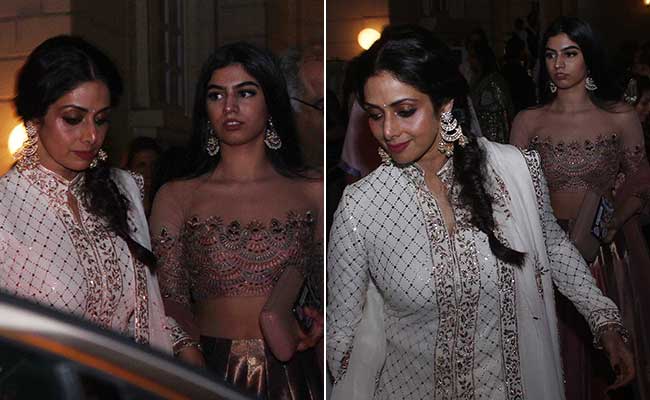 Earlier this month, Sridevi, 53 and her elder daughter Jhanvi, 19, caused somewhat of a meltdown on the internet with this picture:

Quantico season 2 is keeping Priyanka Chopra busy in New York but that doesn't mean we miss an appearance from her on Diwali:

Wishing everyone a very happy Diwali... May all your dreams come true and may you be blessed with love, luck and light!

Sonam Kapoor turned heads in an anarkali designed by Abu Jani and Sandeep Khosla. Sonam twirling is a beautiful sight:

Meet Badrinath and his shopaholic dulhaniya. Yes, that would be Varun Dhawan and Alia Bhatt:

In between shots Badri and I lighting it up this Diwali. #badrinathkidulhania

Happy Diwali all you lovely people!!! Missing the diwali madness but please please be safe and happy! Hopefully it'll be a noise free year

Happy Diwali Its all sparkly everywhere

Sonakshi Sinha was a ray of sunshine in her Diwali special ensemble:

A very excited duo - Jacqueline Fernandez and Sidharth Malhotra - shared Diwali wishes from the sets of their new film, an action-comedy.

This is what Nargis Fakhri was upto half way across the world:

Neetu Kapoor shared a sneak peek from her Diwali party with Karan Johar in attendance:

Taapsee Pannu is quite an artist:

Love, light, happiness! And yes a better Rangoli this year definitely means a better year ahead

Promoted
Listen to the latest songs, only on JioSaavn.com
Rishi Kapoor's Diwali wish will literally set your screen on fire:

Happy Diwali to you all.