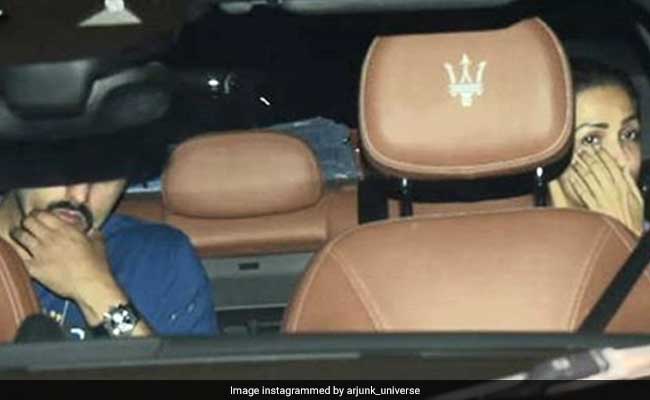 Arjun Kapoor and Malaika Arora, twinning in blue, arrived at actor Chunky Panday's birthday party together on Wednesday night. Pictures of the rumoured couple are being shared on social media by fan clubs, ensuring a spot on the list of trends. Arjun Kapoor, who is currently filming Panipat, sported a moustachioed look. He was dressed rather casually complete with a baseball cap. Malaika opted for a minimal make-up look with her hair tied in a top knot. Malaika and Arjun Kapoor recently trended for their respective Maldives vacation pictures. Though they shared the pictures on separate dates, the Internet suspected they were on the vacation together.

But first check out pictures from their mid-week night-out:

Arjun Kapoor and Malaika Arora have reportedly been dating for quite some time now and reports of their rumoured impending wedding often circulate on social media. Pictures from Arjun and Malaika's outing and their get-togethers with their friends also trend on social media frequently.

On Koffee With Karan, Arjun Kaoor confirmed that he's ready to get married but did not name whom he is dating. At a media event when Arjun Kapoor was asked about the reports of his rumoured wedding, the actor said: "When there is something to talk about, you will all know," reported news agency IANS. When Hindustan Times asked the same question to Malaika, she replied: "I never answer personal questions. Not that I shy away from answering or whatever. I just don't feel comfortable talking about my personal life."

On the work front, Arjun Kapoor is awaiting the release of Sandeep Aur Pinky Farar while he's making Panipat with director Ashutosh Gowariker.

Inside Ram Charan's Birthday Celebrations With Wife Upasana. She Baked The Cake