Over the weekend, Soundarya tweeted a photo, featuring herself and her son Ved from a swimming session in a pool. 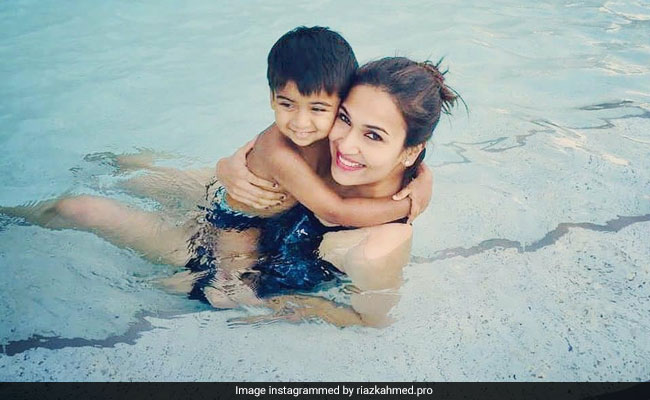 Megastar-politician Rajinikanth's younger daughter Soundarya Rajinikanth deleted a former tweet and issued a clarification after she found herself in the midst of a social media controversy as a photo of hers (now deleted) appeared to irk a section of the Internet for appearing to be "insensitive." Over the weekend, Soundarya tweeted photos, one of which featured herself and her son Ved from a swimming session in a pool. The Internet quickly reminded her that such a post appears to be rather inappropriate amidst Chennai's severe water crisis. Chennai is facing a 40 per cent cut in piped water supply as all four reservoirs outside the city have dried up.

In a tweet on Sunday, Soundarya said she's deleted the photos in light of the "sensitivity" of Chennai's water crisis but added that it was shared in "good spirit." She also added that the photos were from her "throwback" collection: "Removed the pictures shared in good spirit from my travel diaries considering the sensitivity around the current water scarcity we are facing. The throwback pics were to emphasise the importance for physical activities for children from a young age only. #LetsSaveWater"

Removed the pictures shared in good spirit from my #TravelDiaries considering the sensitivity around the current #WaterScarcity we are facing . The throwback pics were to emphasise the importance for physical activities for children from a young age only #LetsSaveWater

In a press meet in Chennai on Saturday, Rajinikanth addressed the issue of critical water scarcity in Tamil Nadu and said: "As of now, immediate measures that need to be taken is saving rain water, it should be on a war-footing mode. Then all water bodies, including lakes and ponds need to be desilted ahead of the monsoon season", he said to a query on the water crisis prevailing in Tamil Nadu," reported news agency PTI.

Soundarya Rajinikanth married Vishagan Vanangamudi in February this year. She was previously married to businessman R Ashwin, with whom she has three-year-old son Ved. Soundarya, who has worked as a graphic designer in the South film industry since 1999, has also directed films such as Kochadaiiyaan and Velaiilla Pattadhari 2.