Soundarya Rajinikanth shared the first glimpse of her newborn baby 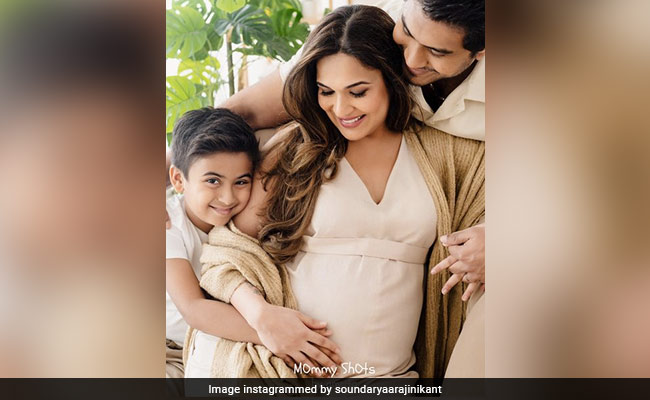 Rajinikanth's daughter Soundarya Rajinikanth and her husband Vishagan welcomed a baby boy on Sunday (September 11). She shared an adorable post on her Instagram handle announcing the birth of her second child. Along with the first glimpse of her newborn baby, she revealed the name of her son Veer Rajinikanth Vanangamudi. Soundarya shared pictures with her husband Vishagan and son Ved from her maternity shoot and wrote a note thanking the doctors. For those who don't know, Vishagan is her second husband and Veer is their first child together. Soundarya's first child Ved is with her first husband Ashwin Ramkumar.

Her note read, "With gods abundant grace and our parents blessings... Vishagan , Ved and I are thrilled to welcome Ved's little brother VEER RAJINIKANTH VANANGAMUDI today 11/9/22 #Veer #Blessed #BabyBoy a huge thank you to our amazing doctors"

Soundarya Rajinikanth got married for the second time in February 2019 to Vishagan in an intimate ceremony. Speaking about her first marriage, she got married to a businessman Ashwin Ramkumar in September 2010 and welcomed their first child Ved in May 2015. However, in 2016 the couple filed for divorce.

In terms of work, Soundarya Rajinikanth is a graphic designer, director and film producer. She began her career as a graphic designer in films, such as Padayappa, Chandramukhi, Sivakasi, Sivaji and more. She became a producer in 2010 with the movie Goa. She debuted as a director in 2014 with the animated action film Kochadaiiyaan. The last movie she directed was in 2017, the comedy-drama Velaiilla Pattadhari 2, starring Dhanush and Kajol.