As of now, immediate measures that need to be taken is saving rain water, said actor-politician Rajinikanth. 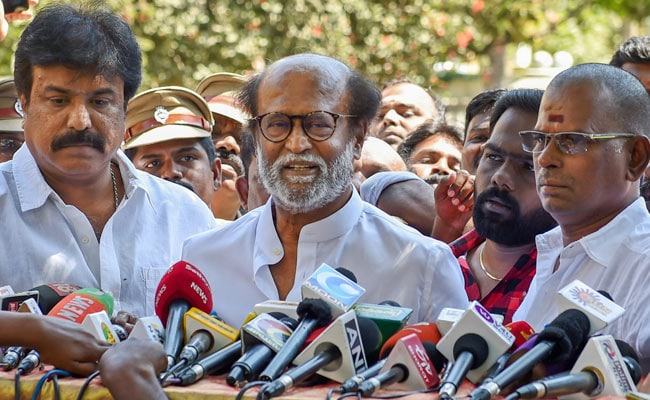 Water bodies, including lakes and ponds need to be desilted ahead of monsoon: Rajinikanth (File)

Tamil film superstar Rajinikanth on Saturday said Rain Water Harvesting (RWH) should be taken up on a war-footing to address the acute water crisis in the state.

The 69-year-old actor was speaking to reporters in Chennai on his arrival from Mumbai, where he was shooting for his film ''Durbar.''

"As of now, immediate measures that need to be taken is saving rain water. It should be on a war-footing mode. Then all water bodies, including lakes and ponds need to be desilted ahead of the monsoon season", he said to a query on the water crisis prevailing in Tamil Nadu.

The city is facing a severe crisis with all four major reservoirs supplying water going bone dry, forcing residents to look for alternatives to tide over the crisis.

The 44-year-old actor, one of the most vocal environmentalists in Hollywood, had shared a post by news outlet BBC on Instagram with the title, "Only rain can save Chennai from this situation".

Rajinikanth replied in the affirmative when asked whether he was upset at not being able to cast his vote in the recently held South Indian Artists Association election.

"Yes (I am upset). Because I did not receive the postal votes on time", Rajinikanth said.

The bi-annual South Indian Artists Association was held on June 23 as per the orders of the Madras High Court. Nearly 1,604 actors and actresses, including top actors Kamal Hassan and Vijay cast their votes.

However, Rajinikanth missed out as he was in Mumbai for shooting for his upcoming flick ''Durbar''.

He had expressed his regret at not being able to vote in a tweet, saying that he had received the postal votes for the election only at 6.45 pm on June 22 despite his efforts to get it earlier.