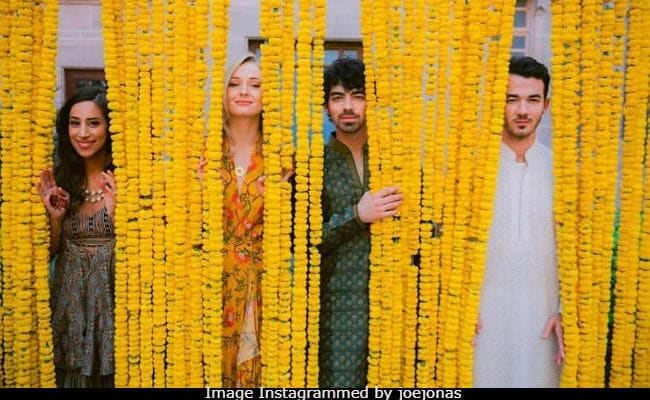 Nick Jonas' brother Joe Jonas just shared an Instagram photo, also featuring finacee Sophie Turner, brother Kevin Jonas and his wife Danielle Jonas. The photo appears to be from an Indian wedding and the last one they attended appears to be of Priyanka Chopra and Nick Jonas' in Jodhpur. In the photo, Danielle, Sophie, Joe and Kevin pose while peeking from behind garlands of marigold, traditionally found at Indian weddings. Joe Jonas had a cheeky caption to go with the photo - "in-n-out", he wrote. Priyanka Chopra's cousin Divya Jyoti, who often accompanies the actress while hanging out with the Jonas family, was one of the first ones to leave a comment on the post: "Too real," she wrote.

When someone mentions in-n-out

The Jonas brothers were an indispensable part of Priyanka Chopra and Nick Jonas' wedding festivities while Sophie Turner appeared to have had joined Team Bride. Post Priyanka and Nick's wedding, the newly married couple continue to make trips with Sophie and Joe. They recently caught up over the Super Bowl weekend at Mammoth Lakes in California, when Priyanka and Sophie built a make-shift beer storage and ice lounge from the snow. Nick Jonas shared a photo of Priyanka and Sophie with the Jonas brothers to write: "

Ahead of that, Priyanka, Nick, Sophie and Joe were busy adding to their adventures in Switzerland.

Meanwhile in previous posts and Instagram stories, Joe Jonas had revealed how much fun he had during Nick and Priyanka's wedding in India. "My face hurts from all the smiling this week," he had written.

Joe Jonas and Sophie Turner got engaged in October 2017 but the couple have made no announcement about a wedding yet.