Sooryavanshi: What Akshay Kumar And Ajay Devgn Said About Their Fans "Fighting" All The Time

"Akshay and I are here so we both want to tell our fan-clubs that please don't fight among yourselves," Ajay Devgn said at Sooryavanshi event. 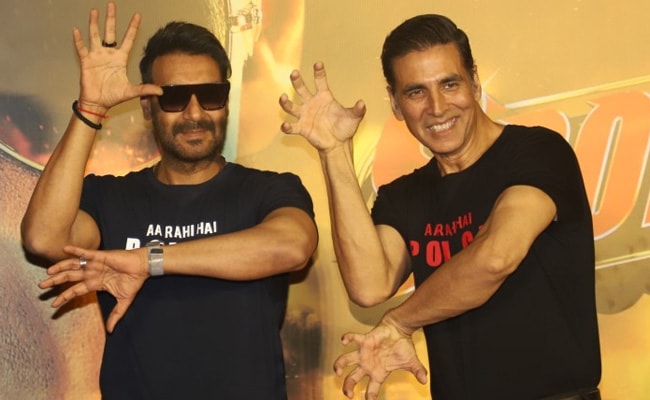 Akshay Kumar and Ajay Devgn at the trailer launch of Sooryavanshi

Rohit Shetty's Sooryavanshi is a much-awaited treat not only for fans of Akshay Kumar but also for Ajay Devgn fans. The Singham actor has an extended cameo in Sooryavanshi (as does Ranveer Singh as Simmba, the third in Rohit Shetty's copverse), a glimpse of which was revealed in the trailer released yesterday. Speaking at the trailer launch event in Mumbai, Akshay Kumar and Ajay Devgn grabbed the opportunity to address the long-standing rivalry between their respective sets of fan-clubs on social media. The Sooryavanshi actors asked their fans to not "fight" among themselves and go watch the movie together instead, reported news agency PTI. "Akshay and I are here together so we both want to tell our fan-clubs that please don't fight among yourselves. We see that our fans fight with each other. So we want to say that we both have always supported each other and we have made this film with a lot of love. You all also please go and watch this film with each other," PTI quoted Ajay Devgn as saying.

Ajay Devgn and Akshay Kumar's much-needed appeal to fans stems from the several times that the actors were trolled on social media - at times for coinciding release dates and often for random hateful trends started by rival fan-clubs. While not quite as brutal as the online wars between fans of South stars Ajith and Vijay, Ajay and Akshay fans have repeatedly been daggers drawn, a situation that is in no way reflective of reality. Fans of Ajay Devgn refer to themselves as Adians while Akshay Kumar fans like to be called Akkians on Twitter. In the recent past, Adians and Akkians clashed on Twitter after Akshay's Bachchan Pandey was set to collide with Ajay Devgn's yet-untitled film with Luv Ranjan in December 2020. However, Bachchan Pandey has been rescheduled for January 2021 to avoid clashing with Aamir Khan's Laal Singh Chaddha. Meanwhile, Akshay's Atrangi Re and Ajay's Hindi remake of Tamil film Kaithi are set to release around Valentine's Day 2021. Fans of Akshay and Ajay also exchanged hate tweets when Akshay Kumar announced Kesari (his film based on the Battle of Saragarhi), months after Ajay Devgn tweeted about Sons Of Sardaar in 2016 (also based on the same historical event). Kesari released in March last year while no release date has been assigned to Sons Of Sardaar yet.

Meanwhile at the event, Akshay Kumar, known for his signature sense of humour, cracked a joke about how he was the first choice for 1991 film Phool Aur Kaante, which turned out to be Ajay Devgn's debut movie. "Ajay and I had started our career together. We both had fought for our debut film, Phool Aur Kaante. Initially, I was there but then he pushed me and got in," Akshay said on a lighter note. Akshay too stepped into Bollywood in 1991 with Raj Sippy-directed Saugandh.

On a serious note, the Sooryavanshi actor added: "Today we have reached this stage where we have done so many films together." Akshay and Ajay are co-stars of films such as Suhaag, Khakee and Insan.

Ranveer Singh, who also features in Sooryavanshi as Simmba, is a fan of both Akshay and Ajay and is "Just too excited". "I've shared screen space with my idols or for Rohit sir who has this one-of-a-kind vision. I'm as excited as an audience. You'll watch this film again and again," PTI quoted Ranveer as saying.

Sooryavanshi marks an addition to Rohit Shetty's cop dramas. The film also stars Katrina Kaif and is all set to hit screens on March 24.