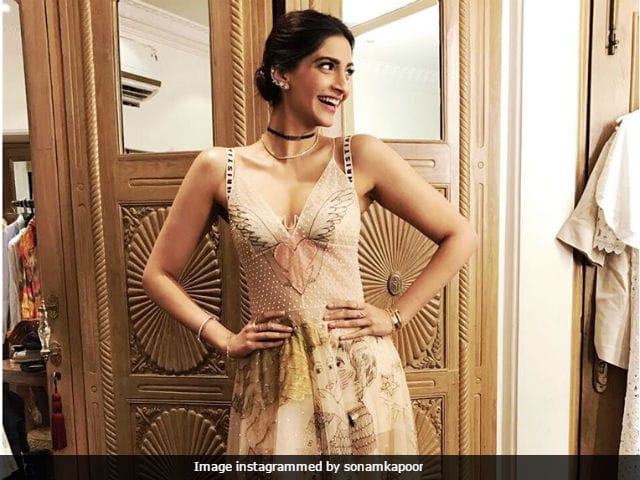 Sonam will next be seen in Padman (Image courtesy: sonamkapoor)

New Delhi: Actress Sonam Kapoor posted a heartwarming message for her mother, Sunita Kapoor on her birthday two days ago. The 31-year-old actress, who shared a picture of her parents, Anil and Sunita Kapoor during the birthday celebrations, thanked her for being an inspiration and family's strength. Sunita Kapoor celebrated her birthday on March 25 along with Anil Kapoor, Sonam and Rhea. Recently, she posted a picture on Instagram with all the Kapoors. In the picture, where everyone can be seen happily posing outside the Cambridge Theatre in London, we could also spot Sonam Kapoor's rumoured boyfriend Anand Ahuja and Rhea with her boyfriend Karan Boolani. The picture posted by Sunita Kapoor has been captioned: "What A Wonderful Way To Celebrate Mothers Day!"

See the picture posted by Sunita Kapoor below:

"To describe my mother would be to write about a hurricane in its perfect power. Or the climbing, falling colors of a rainbow." -Maya Angelou Happy Birthday Mom!! Thank you for being our inspiration, our strength & all that is beautiful in our lives...Love you!!

Happy birthday mom! My everyday inspiration and motivation to be better, wiser, compassionate, loving, generous and also to lower my fat percentage. The last one is proving to be the toughest and I think that's a good thing. We will blame it on the kapoor gene. I love you more than the greatest feast on earth.

She held me then and she holds me still... in her heart and arms! Happy birthday to my mother who is stunningly good looking, intelligent, witty and so much more. Much love from the only child you passed those genes and traits onto. #HappyBirthdayMom @kapoor.sunita

Anil Kapoor also posted a sweet message for his wife on her birthday. In the tweet, the 60-year-old actor wrote that he finds his 'peace, thrill, bliss and sanity' in his wife.

In you I find my peace, my thrill, my bliss and my sanity....
Happy Birthday Sunita! And thank you for....Well.... You! #SunitaKapoorpic.twitter.com/9lxXDnVoLH

Promoted
Listen to the latest songs, only on JioSaavn.com
On the work front, Sonam Kapoor is currently shooting for R Balki's Padman co-starring Akshay Kumar and Radhika Apte. She will also be seen in Rajkumar Hirani's Dutt. The film, which is based on the life of actor Sanjay Dutt, will see Sonam Kapoor portraying the role of the 57-year-old actor's love interest. She will also feature in Shashank Ghosh's Veere Di Wedding along with Kareena Kapoor and Swara Bhaskar. The film is being co-produced by Ekta Kapoor and her sister Rhea Kapoor.