Sonam Kapoor married Anand Ahuja in a traditional Sikh ceremony in May, 2018 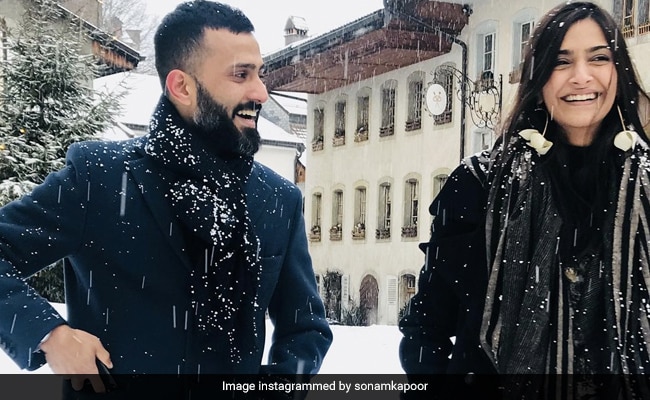 Sonam Kapoor's husband Anand Ahuja makes "every day phenomenal" for her. The duo, who often give us couple goals, are currently staying in London. On Friday, Sonam posted a few pictures from their London diaries, as well as snippets from their trips and wedding and wrote a loved up note for Anand Ahuja. In the pictures, the couple can be seen enjoying snowfall together. In the photo from their wedding festivities, Sonam can be seen wearing a saree while Anand looks dashing in a sherwani. Sharing the pictures, the actress wrote: "I love you... you make #everydayphenomenal." Sonam Kapoor married Anand Ahuja in a traditional Sikh ceremony in May, 2018.

Sonam and Anand Ahuja often share appreciation posts for each other on their respective social media profiles. Earlier, while sharing pictures of the actress reading a book, he wrote: "Girlfriend Appreciation Post! I love this picture because it captures the beauty, style and 'NERDINESS' of my #everydayphenomenal! #TBT #WillYouBeMyGirlfriend."

In September, Sonam shared this appreciation post for Anand Ahuja:

Earlier on Friday, Sonam Kapoor shared a picture of herself, her father, actor Anil Kapoor, and her sister Rhea Kapoor and expressed how much she is missing them. "Majorly missing them," she captioned the post, on which her mother Sunita Kapoor hilariously commented: "What about me?"

In terms of work, Sonam Kapoor's last films were The Zoya Factor and Ek Ladki Ko Dekha Toh Aisa Laga. She has also starred in movies like Neerja, Mausam, Raanjhanaa, Aisha and Delhi 6, to name a few.