Sonam Kapoor And Anand Ahuja Are In London. Back Home, Someone Is Missing Them A Lot

Sharing a few loved up photos of the two, Sunita Kapoor wrote: "Miss you two and love you both so much." 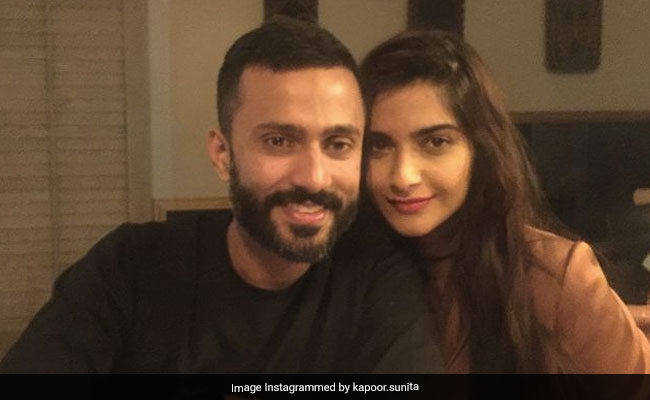 Anand Ahuja and Sonam Kapoor in a loved up pic (courtesy kapoor.sunita)

Sonam Kapoor and Anand Ahuja are currently in London and someone back home is missing them a bit too much. The couple shuttle between London (entrepreneur Anand Ahuja is based out of the English capital), Mumbai (which is Sonam Kapoor's workplace) and Delhi (where Anand Ahuja's family home is) throughout the year. Sonam and Anand's current address is London, where they own a plush apartment. In a post shared on Friday, Sonam's mom Sunita Kapoor poured her heart out about missing the two. Sharing a few loved up photos of the two, Sunita Kapoor wrote: "Miss you two and love you both so much. So, so blessed, gratitude and more gratitude."

"Miss you, mama," commented Sonam while Anand wrote: "Love you."

Just a day ago, Sonam Kapoor, who is extremely close to her family and is often homesick when in London, wrote about "majorly missing" them."

On Diwali, Sonam wrote how celebrations have been low-key this year, adding that she missed being with her family on the special day: "Diwali is about family. And my family really loves celebrating it with all our friends and family. Next year it'll be that again, I know it. I miss them with all my heart. And I hope I see them soon together."

Anand Ahuja owns a one-of-a-kind sneaker boutique named VegNonVeg, which opened it's first store in Mumbai in 2018 He is also the founder of the fashion label Bhane. In terms of work, Sonam Kapoor was last seen in 2019 movie The Zoya Factor and hasn't announced her upcoming project yet. Sonam and Anand had a big fat wedding in Mumbai in May 2008.

"Kindly Mention It Was A Toy," Tweets Raj Kundra On Report Claiming He Bought Son A Lamborghini