"I'd like to thank my mama who moved heaven and earth for everything. I love you mama," wrote Sonam Kapoor 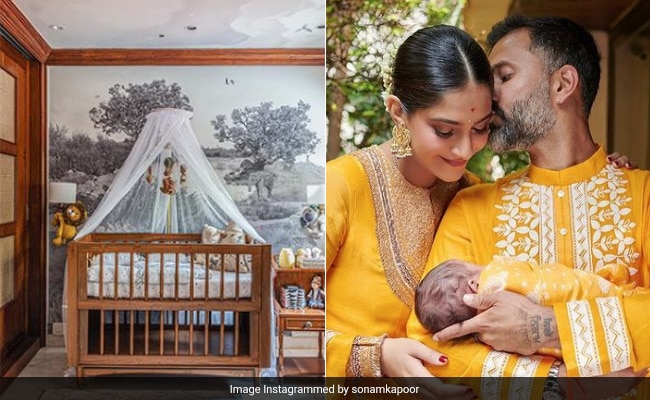 Sonam Kapoor, who welcomed her son Vayu in August, on Sunday, offered a glimpse inside her son's room. On Instagram, she shared several pictures in which we can see baby Vayu's bed, cupboard and toys. Along with the photos, the actress wrote a thank you note to her mom Sunita Kapoor for helping the "new mom" set up her baby's room. In the note, she also thanked her sister Rhea Kapoor and her other friends. She wrote, "This post is an appreciation post for the people who helped my mom and I put together everything for the arrival of my baby boy. First I'd like to thank @andstudioofficial, who specialises in nursery design, @anushananavati designed my baby boy's nursery in the shortest amount of time with absolutely no drama, I've known Dhwani of @wallpaperscissor since 2009, and she's always been creative and precise, and I was very sure that Anusha and wallpaper scissors would do a beautiful job of making my nursery in Bombay a thing of wonder and beauty and boy was I right!! @dinky_nirh curated absolutely everything that I needed for Vayu and made sure I had absolutely every small thing that goes into rearing a newborn. My friend @sukeena founder of @luminaireco, who put together my Maternity wardrobe and then Vayus wardrobe. Thanks to you my baby is the chicest little boy around. Thank you @organisewithease for setting up everything in the nursery and indulging my OCD.

Thanking her mom Sunita Kapoor, Sonam wrote, "Most importantly I'd like to thank my mama who moved heaven and earth for everything. I love you mama." She concluded her note with these words, "Special thanks Rhea Kapoor,  Neha Zahoor Ahmad,  Pallavi Patil Bhat, Lakshmi Poojari,  Chandni Modha,  Paulina Felicjanska, Anum Bashir  you all. PS : All the relevant tags for everything that I bought are on the picture . If I've forgotten anyone please DM me I'll add to the post. This is not an ad but a nod of gratitude to the kind women who helped out a new mom."

Sonam Kapoor and Anand Ahuja welcomed their son Vayu Kapoor Ahuja on August 20. In September, they announced his name in a special post featuring the new parents twinning in yellow outfits and their adorable son in a similar outfit. Along with the cute family picture, she wrote a long note on why she opted to name her son Vayu. An excerpt of her post read, "In the spirit of all that is sacred, life-giving and eternally ours, we seek blessings for our son, Vayu Kapoor Ahuja. In Hindu scriptures Vayu is one of the paanch tatvas. He is the deity of breath, the spiritual father of Hanuman, Bheem and Madhav and He is the incredibly powerful lord of wind. Praana is Vayu, a guiding force of life and intelligence in the universe. All the deity's of Praana, Indra, Shiva and Kali relate to Vayu."

Sonam Kapoor and Anand Ahuja got married in May 2018 after dating for several years.