We see what you did there, Sonakshi Sinha 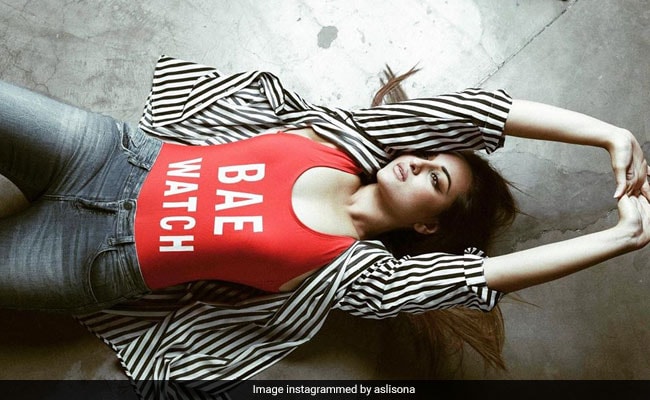 Sonakshi Sinha's word play and pun game is totally on point and her latest Instagram entry is a perfect example of it. The actress, on Wednesday, shared a stunning picture of herself, accompanied with a surprising humorous caption to go with it. In the picture, the actress can be seen chilling, dressed in a red leotard, the text printed on which read: "BAE WATCH." She wore it with a pair of blue denims. She threw over a striped shirt. Sonakshi styled her look with perfect make-up. She opted for a nude lip colour, dramatic eye make-up and contoured cheeks. Extra points for the swag. Adding a caption as hilarious as the text on her top, Sonakshi Sinha wrote: "Kaha ho bae?"

Sonakshi Sinha, who has limited the comments on her post, did find her Instafam agreeing with her post. "This caption = my life," commented an Instagram user, while a few others added LOL emojis. Check out Sonakshi Sinha's post here:

Sonakshi Sinha stepped into Bollywood with the 2010 film Dabangg, opposite Salman Khan. She has starred in several super hit as well as some critically acclaimed films like Rowdy Rathore, Son Of Sardaar, Dabangg 2, Holiday: A Soldier Is Never Off Duty, Lootera, Once Upon A Time In Mumbai Dobaara, R... Rajkumar, Action Jackson, Kalank and Mission Mangal, among others.

Sonakshi's last theatrical release was Dabangg 3, co-starring Salman Khan. Her upcoming project is Bhuj: The Pride Of India, starring Ajay Devgn in the lead role. The film is slated to release on OTT platform Disney+Hotstar.