Sonakshi Sinha Has Been The "Queen" Of Her Castle Since Forever. See Pic

The 33-year-old actress posted a photo, in which she can be seen posing inside a toy castle 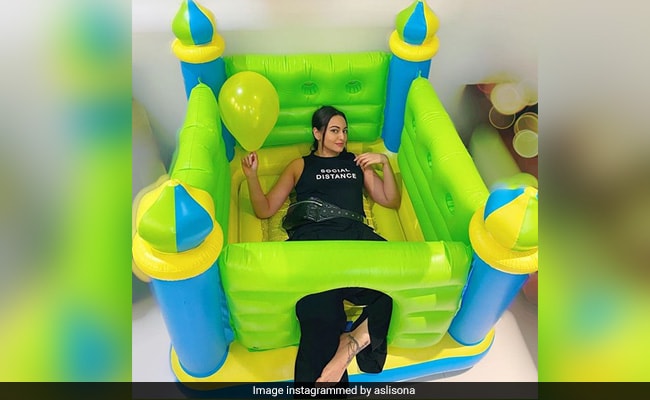 Sonakshi Sinha's latest entry on Instagram will surely cheer you up. The actress, on Thursday, shared a picture of herself which proves that she has been the "queen" of her castle since forever. Sonakshi, 33, posted a photo, in which she can be seen lying inside a toy castle. She looks stunning in a black t-shirt and black trousers as she holds a green balloon and poses for the camera. The text on her t-shirt, which read: "Social distance," also grabbed our attention quickly. Sharing the picture, Sonakshi Sinha captioned it perfectly. She wrote: "Queen of my castle." Check it out here:

Queen of my castle

Sonakshi Sinha, who has been very vocal about cyber bullying, recently started her own online show "to put a full stop to cyber bullying and trolling." It is an interview format show titled Ab Bas, where she discusses topics such as online harassment and trolling. Sonakshi, who has been a frequent target of Internet bullies, deactivated her Twitter account in June and has also deactivated the comments section in her Instagram posts. Announcing her exit from Twitter on June 20, the actress wrote: "The first step to protecting your sanity is to stay away from negativity."

In terms of work, Sonakshi Sinha made her debut in Bollywood with Salman Khan's Dabangg in 2010. She went on to feature in several box office hits like Rowdy Rathore, Son Of Sardaar, Dabangg 2, Holiday: A Soldier Is Never Off Duty and R... Rajkumar. She will next be seen alongside Ajay Devgn in Bhuj: The Pride Of India.