'Sonakshi Sinha Can Do Anything When it Comes to Action,' Says John Abraham 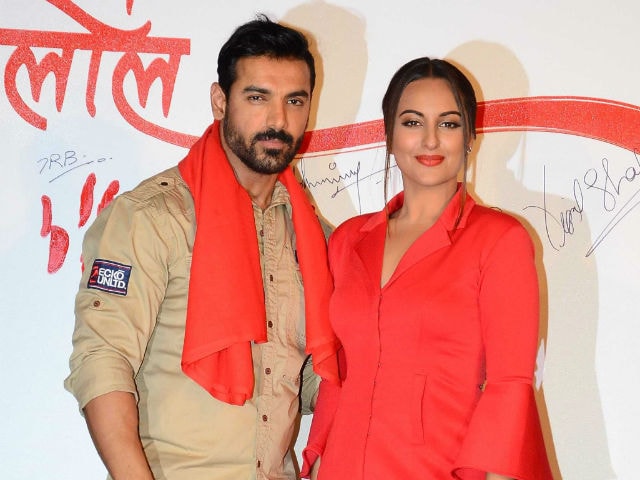 The Dishoom actor, who was present on Friday to release a song Rang Laal from Force 2 along with Sonakshi, said, "It is director's prerogative that he wants to give an opportunity to his female actors to do this kind of actions ... We love watching them dancing and singing. So for a change, when someone like me sees women doing actions it impresses me a lot."

"When I was told on the second day of the shoot that there was a shot where we both had to jump after a blast, I was worried. How will I tell Sonakshi to jump? Finally, she jumped and after that, I realised this girl will do anything," John added.

"Sonakshi didn't say no to a single action scene. She was absolutely fantastic and comfortable. And seeing her I feel there should be more action sequences for women in the films," the 43-year-old actor said.

The Rocky Handsome actor also spoke about the recent controversy over Pakistani artistes working in Bollywood. "I think enough has been spoken about it. You just expect us to join the bandwagon with one more comment. I think the song Rang Laal says it all."

"I always say my country comes first. That's all I can say. My country is most important to me. It's not about Hindu, Muslim or Christian, we all are Indian," he added.

Rang Laal which has a tagline India Strikes Back is composed by Gourov Roshin and John is joined by singer Dev Negi in the video. Sonakshi Sinha is also seen lip-syncing in some parts of the video.


The sequel to the 2011 hit film Force, Force 2 is directed by Abhinay Deo, which features John Abraham, Sonakshi Sinha and Tahir Bhasin in the lead roles. It brings back ACP Yashvardhan who teams up with RAW agent KK aka Sonakshi Sinha to bring down a terrorist Shiv played by Tahir Bhasin.

Promoted
Listen to the latest songs, only on JioSaavn.com
The movie is all set to hit theatres on November 18.