Soha Ali Khan On Embracing Motherhood: 'I Literally Pass Out At Night'

"It is a scary time as well as an exciting time because she is exposed to so much," Soha Ali Khan on Inaaya growing up 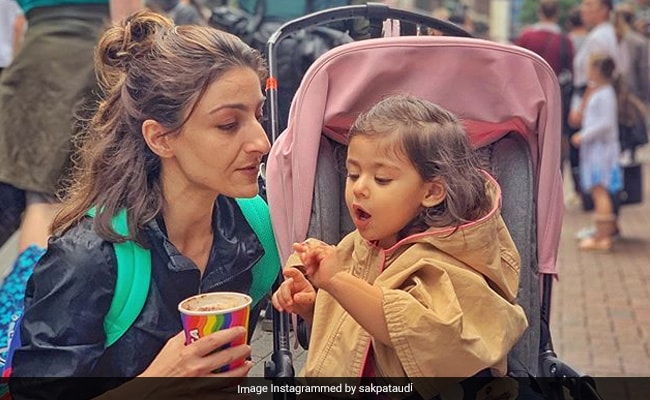 Actress Soha Ali Khan opened up about embracing motherhood and how that's changed her life at a recent event in the National Capital. Speaking with news agency IANS, the 41-year-old actress revealed as a full-time mom and part-time professional has changed her daily routine and often leaves her "exhausted": "I used to wake up at noon and have lunch straight-away. Now, I'm up at like before 7 and I literally like pass out at night. I don't go to bed but by like 10.30-11, I'm exhausted. Often, I can't sleep at 11 because you have a social commitment; you have a professional engagement... I think that women are used to wearing multiple caps but I know that being a mother, being a wife, being a daughter or being a sister, you are required to be all those things and then you're required to work, fulfil your professional commitments," IANS quoted her as saying.

Me and my girls #chhotidiwali

Talking about motherhood, Soha Ali Khan confessed that after Inaaya was born, she's become her top "priority": "Then where's the time for me? You have to carve out that time for yourself as well. So, that me time has become very precious to me. It's all about getting balance of course your child becomes your priority, more than work, more than your husband, more than anything else, your child comes first and for the first formative years, it has to be like that or it should be like that I feel personally and then of course those things that are important to you, you strike a balance with and you try and have it all."

Soha Ali Khan added that watching Inaaya grow up is "scary" and "exciting" at the same time: "I want her to learn and grow all the time. You know, this is the age where you can see that she is absorbing everything, she is repeating things. It is a scary time as well as an exciting time because she is exposed to so much. She is not just exposed to me and I would like to think that I am the best influencer on her but I am sure that I am not perfect, so, you know, school, other children, other parents, staff, other family members, everyone is contributing to her development at this point," Soha told IANS.

More kisses in the park