So, What Did Taapsee Pannu And Her Sisters Do In Maldives? Her ROFL Post Is The Answer 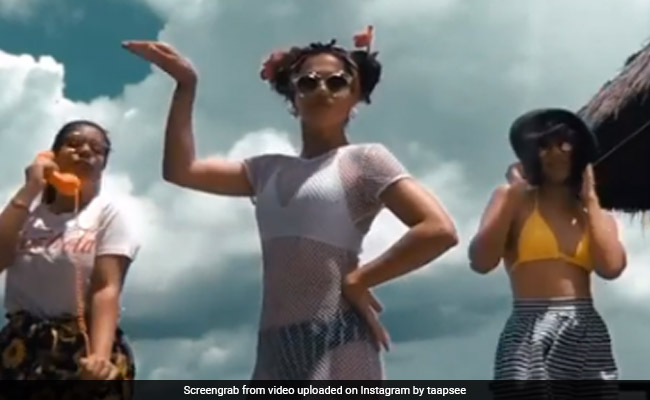 Taapsee Pannu and her sisters in a still from the video. (courtesy: taapsee)

Taapsee Pannu, who has been sharing envy-inducing posts from her Maldives vacation, added another one to her Instagram profile on Monday. Well, let's just say that the video posted by the actress is a round-up of how much fun  Taapsee and her sisters Shagun and Evania had during their holiday in Maldives. The ROFL video features the trio chilling together, goofing around and having lots of fun. Taapsee captioned the video: "So what did Pannus do in Maldives? #BigginiShoot." From Taapsee's Judwaa 2 co-star Varun Dhawan, to her Bhumi Pednekar (Taapsee's Saand Ki Aankh co-star), everyone loved the video. "Epic,"wrote Bhumi, while Varun dropped LOL emoji in the comments section. Later, Taapsee's sister Shagun Pannu posted the same video on her Instagram profile.

Here's a quick glimpse of the fun that the Pannus had in Maldives:

My 2 favourite times of the day.... dawn and dusk. And this trip is making me feel I can never have enough of it. #Maldives #Holiday #TajExotica #TapcTravels

The second dive of the trip and we got the best weather to see some of the best Corals ! P.S- kindly notice the actor in me who unconsciously face facing to the camera under water @tajmaldives #Holiday #Maldives #TajExotica #TapcTravels

Taapsee Pannu's fans will get to see a lot more of her as she has a busy schedule ahead, with back-to-back projects lined-up. The actress' forthcoming projects include Vinil Mathew's Haseen Dillruba (also starring Vikrant Massey), Aakash Bhatia's Looop Lapeta and Rahul Dholakia's Shabaash Mithu. Looop Lapeta, which will also feature Tahir Raj Bhasin, is the Hindi adaptation of the 1998 German hit Run Lola Run while Shabaash Mithu is based on the life of Indian women's cricket team captain Mithali Raj. The actress will also be seen in the film Rashmi Rocket.

The actress is best-known for her performances in critically acclaimed as well as hit films like Pink, Naam Shabana, Soorma, Mulk and Manmarziyaan, to name a few. Her last project was Anubhav Sinha's 2020 film Thappad.