So No One Told You The Monica-Ross Dance 2.0 Was Gonna Be This Way? Swap Ross For Ed Sheeran

"Just some routine dancing with a friend," wrote Courteney Cox 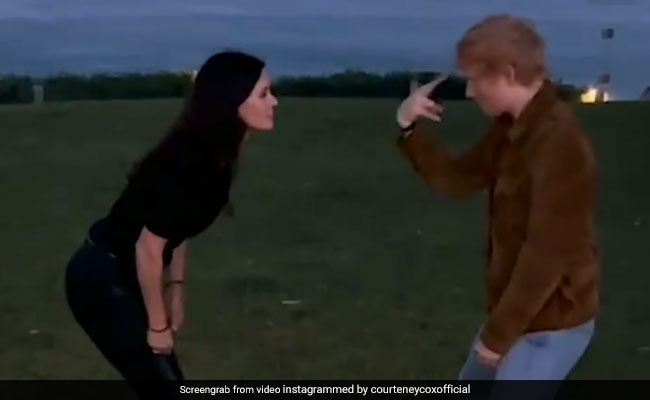 Courteney Cox and Ed Sheeran in the video. (courtesy courteneycox)

Attention please! Anyone and everyone who has been complaining about Monica and Ross Geller's popular routine not being recreated on the recently-held F.R.I.E.N.D.S reunion, your wish has been granted. There's only a small change, instead of David Schwimmer, this rendition features Courtney Cox with, wait for it... Shape Of You singer Ed Sheeran. Yes, you read that right. The duo recently recreated the popular high school dance routine performed by Ross and his sister Monica on the show at Dick Clark's New Year's 'Rockin' Eve party as they welcomed 2000. Firstly, let's take a moment to appreciate what a great job both Courteney Cox and Ed Sheeran did.

Courteney Cox, sharing the video on her Instagram profile, wrote in her caption: "Just some routine dancing with a friend." She added the hashtag #ReRoutine to her post. Check out the video already:

Courteney Cox's character Monica Geller in F.R.I.E.N.D.S was the mama hen of the group, which included 5 others - Lisa Kudrow as the goofy albeit endearing Phoebe Buffay, Jennifer Aniston as the sassy fashionista Rachel Green, David Schwimmer as a nerd named Ross Geller, Matthew Perry as the ever charming Chandler Bing (we still have a tough time recalling what he did for a living) and always hungry actor Joe Tribiani, played by Matt LeBlanc.

Meanwhile, the F.R.I.E.N.D.S reunion, which was announced last year, has been a much-talked about topic for the longest time. It is streaming on OTT platforms HBOMax and Zee5. The show which first aired in 1994 and ran for 10 superhit seasons, is deeply embedded in our cultural consciousness. It followed the lives of six friends living in New York as they navigated personal and professional joys and tribulations, much of it converging around a coffee shop named Central Perk.