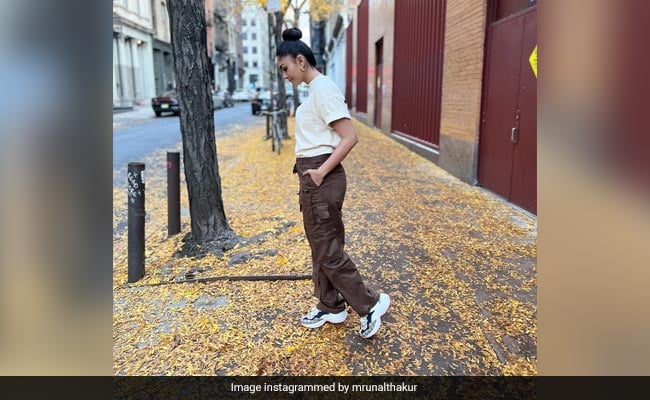 Sita Ramam star Mrunal Thakur scooped some time out of her busy schedule and is currently holidaying in the US. The actress, on Thursday, shared a set of stunning pictures from her New York diaries and we can't help 'fall'ing for the postcard-worthy photos. The aforementioned pictures happen to be from the streets of New York. Mrunal Thakur was dressed for the season perfectly in an off-white t-shirt that she paired with brown pants. Mrunal Thakur captioned the post: "Autumn leaves and pumpkins please." She added the hashtags #newyork, #nyc, #fall, #autumn and #travel to her post.

Earlier this week, Mrunal Thakur had shared a set of pictures from her holiday in Chicago. The actress simply captioned the post: "Chicago" and added the hashtags #tourist, #aroundtheworld, #travel, #travelphotography to her post.

Earlier this month, Mrunal shared pictures from her reunion with Sita Ramam co-star Dulquer Salmaan in the US and she wrote: "Reunited in US."

On the work front, Mrunal Thakur was last seen in Sita Ramam, co-starring Dulquer Salmaan and Rashmika Mandanna. The actress is best known for her performances in films like Super 30, Toofaan, Batla House, Love Sonia, Ghost Stories, among many others. Her recent releases include Dhamaka with Kartik Aaryan and Jersey, co-starring Shahid Kapoor.