"Shiladitya Mukhopadhyaya and me are thrilled to share this news with you all," wrote Shreya Ghoshal 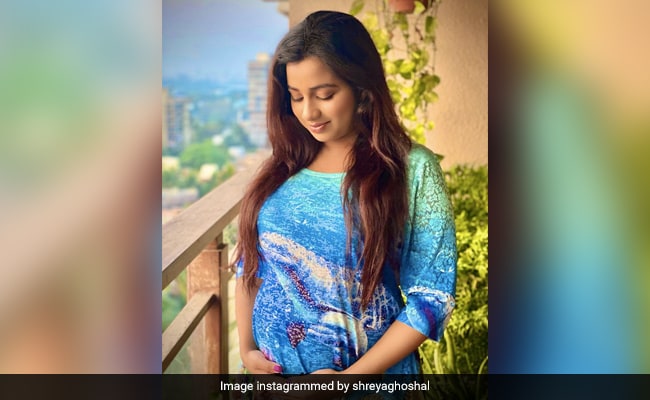 Singer Shreya Ghoshal and her husband Shiladitya Mukhopadhyaya are expecting their first child, she announced her first pregnancy in an adorable post on Instagram on Thursday. Shreya and Shiladitya Mukhopadhyaya, her childhood sweetheart, got married in 2015 as per traditional Bengali ceremony. On Thursday, the singer shared a picture of herself cradling her baby bump and she looks divine in a blue outfit. "Baby #Shreyaditya is on its way! Shiladitya Mukhopadhyaya and me are thrilled to share this news with you all," wrote the singer in the caption of her post and added: "Need all your love and blessings as we prepare ourselves for this new chapter in our lives."

Shreya Ghoshal married Shiladitya Mukhopadhyaya on February 5 in 2015. The duo dated for several years before getting married.

On their anniversary this year, Shreya wished her husband with this sweet note: "Happy 6th anniversary to us #Shreyaditya. Every time you walk in to the room, I still get butterflies. I love you Shiladitya."

Shreya Ghoshal rose to popularity for her work in the 2002 hit film Devdas, for which she received the National Film Award for Best Female Playback Singer. She sang Silsila Ye Chaahat Ka, Bairi Piya, Chalak Chalak, Morey Piya, and Dola Re Dola in the film. She also won the Filmfare Award for Best Female Playback Singer and Filmfare RD Burman Award for New Music Talent for these tracks. Shreya is also known for singing Piyu Bole from Parineeta, Jadu Hai Nasha Hai from Jism, Barso Re from Guru, Ooh La La from The Dirty Picture, Manwa Lage from Happy New Year and Ghar More Pardesiya from Kalank.