Signed Gabbar Is Back Because of Akshay Kumar, Says Suman Talwar 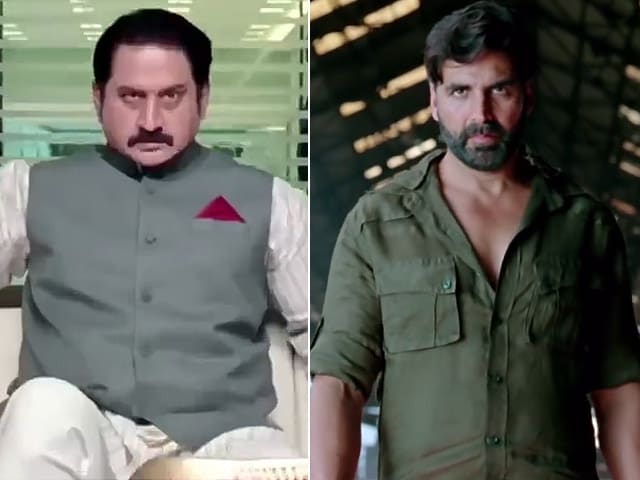 Suman Talwar (left) and Akshay Kumar in a still from Gabbar Is Back.

New Delhi: Telugu actor Suman Talwar said he could not have asked for a better Bollywood debut than Gabbar Is Back as it gave him an opportunity to act alongside action star Akshay Kumar.

Suman, 55, who was recommended by Akshay for the villain's role in the upcoming film, said he is a huge admirer of the Rowdy Rathore star's work. "The first thing that thrilled me about Gabbar Is Back was working with Akshay Kumar. In fact, it was he, who recommended my name, I never knew that though. I was very excited that Akshay was the film's hero. I felt this was the best film to jump into," he said.

"I knew I had to be more careful with my work in the film as he had given me this opportunity and I wanted to live up to his expectations," Suman told PTI.

Describing his experience of working with Akshay as "amazing", Suman, who like the Bollywood star is a martial arts expert, said that it was not easy to fight Khiladi Kumar on screen.

"I immediately knew there would be action scenes as there was Akshay Kumar in the film and I was happy that I would get to show my talent. We had a great time shooting for action scenes, we even got injured too but he took it easy. It is not easy fighting with Akshay Kumar. I never thought that he would be so disciplined. He is a professional, coming to the sets at 8 am in the morning, focusing on his work and never complaining. It was shocking for me to see an actor of his stature to be so dedicated and involved and attached to the whole unit," he said. (Also Read: Gabbar Is Back. Bollywood Villains are the New Heroes)

For Shivaji - The Boss actor, the production house, the film's director and co-actors are more important than his own role in the movie and Suman said he was happy that Gabbar Is Back fit his wish-list.

"I got a lot of offers from Bollywood but something or the other was missing in those offers. When I got a call for Gabbar Is Back, I already knew about it because it is a remake of Tamil film Ramanaa and it was also made in Telugu. Both were successful. My role in Gabbar Is Back is highlighted because of the action scenes. Krish is the director, I know him. Producers are good, the hero is great so everything about this movie works for me," he said. (Also Read: Beware. Akshay Kumar Has a Power Wala Danda in Gabbar Is Back)

Suman is ready for a long Bollywood innings and showed his interest to work under the direction of filmmaker Sanjay Leela Bhansali, who has produced Gabbar Is Back.

Promoted
Listen to the latest songs, only on JioSaavn.com
"I really like his last film Ram Leela and would love to be directed by him. Mr Bhansali's films are very colourful and a treat to the eyes. Audience gets the worth of its money when it goes to see his movies. He picks up different themes for his films, so it would be wonderful if I get to work with him," the actor said.

Gabbar Is Back, also starring Shruti Haasan and Kareena Kapoor Khan, will hit the screens on May 1.